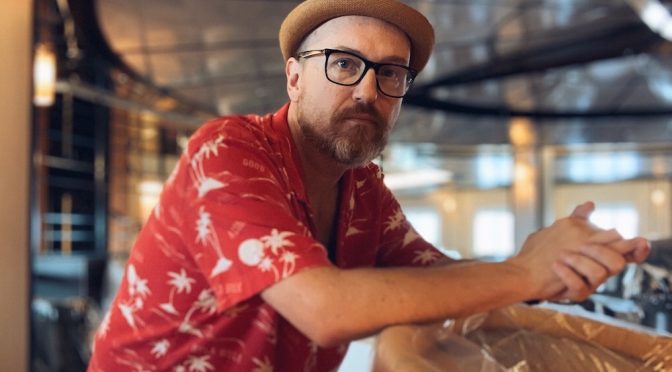 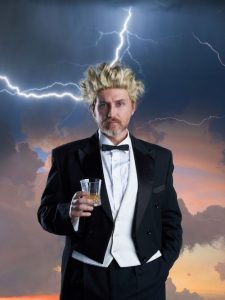 Q. Drew, you were trapped on board a cruise ship for two months at the height of Covid. Were you one of the entertainers on the cruise? This must have been a harrowing experience. And yet you made a hilarious and poignant video series called Actual Cabin Actual Fever – can you tell readers a bit about the process and how you turned a nightmarish experience into comedy?

A. I was employed as Guest Entertainer but as you say the day after I boarded to start my new job a world-wide pandemic was declared and tours were suspended. For some unknown reason we were kept on board even though there were no passengers. Then we were eventually kicked out of Sydney Harbour and soon after we were kicked out of Australian waters. I was rocked but I kept myself busy by recording our unique position in history as we sailed without a plan further and further away from home. I kept myself entertained by doing little talk shows from my cabin. Over time I decided to add low-fi singing and dancing to the videos. It was loose but ridiculous enough to gain a loyal crowd on IGTV and eventually it garnered international media attention. I was shocked. Still am.

Q. At the end of July this year you have your musical comedy show ‘As Luck Would Have It’ playing at the Illawarra Performing Arts Centre for a short time, produced by the Merrigong Theatre Company and directed by Leland Kean. The show is a further extension of your Covid cruise experience. Can you tell readers a bit about the process of adapting this video series into a musical comedy?

A. The absurdity of making a tv show in your cabin during a pandemic was a great start to writing this new play but it was only the beginning. Since I was repatriated the whole world’s population really struggled physical and mentally with the by products of covid. In my case, both my parents passed away since I returned and I had moved home to care for them. I moved and lost everyone in my life for a while there. Needless to say a lot changed. I can’t even recognise the fella who boarded the Pacific Explorer Cruise Ship in 2020. And I’m not alone in this discombobulating identity shift. So the play uses standup and farce to illustrate the absurdity of life on the ship but it has a rather hopeful yet dark undercurrent that echoes a universal search for some kind of steady ground. The songs are perhaps the deepest and most affecting emotionally. They are all pretty funny but there’s always a few notes of sadness. I’ve written over a dozen plays and this one is the most exposing. I feel very vulnerable. Thank god it’s got jokes as well haha. Test audiences have really laughed. I like shows to find great comedy or drama by using both. It always rings true when there’s both.

Q. Drew, you are a graduate of Wollongong University with a Bachelor Of Creative Arts. You have a classical singing background. Was it on this basis that you auditioned for the course? Is this where it all started for you?

A. You’re bang on there. I did audition as a classical singer but swiftly moved into acting and design. In fact I didn’t sing for many years in shows-not seriously at least. I trained for eight years as a tenor but I was too young to get the gravitas I wanted vocally. It’s important to say inter-arts training I did at uni has been vital in writing a work like As Luck Would Have It. There are several art forms in the show that need to talk to each other. Something I adore.

Q. You have worked with many theatre companies such as the Darlinghurst Theatre Company, Strut and Fret production and the Edinburgh Puppet Company? Any particular experience(s) with one of the theatre companies that stick out?

A. I was lucky enough to work at the Darlinghurst Theatre Company during its vibrant beginnings and I must say, I’m very glad for that part of my acting life. Such fun and an ever expanding vision of theatre in Sydney. And now, it’s a hallmark in our theatrical landscape. I’m so happy to have been part of its early incarnation.

Q.. You have also run stand-up comedy venues over the years. What was this experience like? Have you done much stand-up yourself? How has this been for you?

A.  Stand up is not for the faint hearted.  I’ve done a little bit of stand up over the years in venues all over the world. However, I mostly emcee. So I’m best known in stand up for running a few rooms. One year in the Adelaide festival I ran a nightly comedy and variety club that started at 10 pm and finished around 3am. It got loose. I loved it. Met a lot of exceptional comedians and cabaret stars. I love watching the audience fall in love with a great performer on a great night. It’s very special… That’s probably why I want even the darkest parts of As Luck Would Have It to be entertaining. And with Leland Kean and the exceptional Merrigong Theatre Company supporting and guiding this work it’s got a really good chance.

A Merrigong Theatre Company production, Drew Fairly’s AS LUCK WOULD HAVE IT  is playing the Bruce Gordon Theatre, Illawarra Performing Arts Centre between 27 July and 6 August 2022. Performance details as per below :-