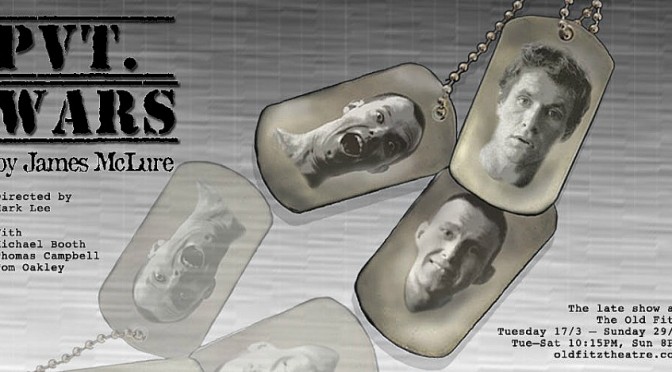 The Old Fitzroy delivers night owl’s a splendid slice of theatre with a production of PVT WARS by James McLure.

Set in a veteran’s hospital, three physically and psychologically damaged soldiers co-exist in fractious society, a kind of camaraderie held together by the commonality of their confinement after combat.

There’s Gately , a sedated patient obsessed with fixing a radio, a nifty metaphor for trying to repair his own life and regaining transmission as a fully functioning human.

There’s Silvio, a strutting sex machine whose cock sureness has not been shaken even though sharp shrapnel has surely severed his cock. This dickless dolt derives deviant pleasure from flashing the female staff.

And there’s Natwick, the Long Island preppie, socio-economically estranged from his ward mates, who joined the Army because he failed civvy street expectations and now, maimed and confined, struggles with suicidal urges triggered by the self-knowledge of his inadequacies.

All three characters are well served by their performers.

Tom Oakley as Gately is an atoll of calm buffeted by Michael Booth’s Silvio, a seething tempest of testosterone. Their exchange in a play acting of a dating game instigated by Silvio is a hilarious highpoint of the play.

Atolls, of course, are places of flashpoint, and Oakley certainly detonates in a dynamic denouement.

Thomas Campbell’s Natwick is a finely tuned counterpoint to the bombast of Booth’s Silvio, simmering self-awareness and self-loathing, his suicidal tendencies a self-proclaimed cry for help.

Director Mark Lee cuts to the emotional heart of the piece, teasing out the humanity in this trifecta of conflict collateral. The pace is pitch perfect and the palette toned with capering comedy and a deft splash of pathos.

Admirers of CATCH 22 (mix Natwick and Gately, you get Nately) and MASH will find much to enjoy in this production, indeed, anyone who appreciates good theatre should enlist in PVT WARS now.