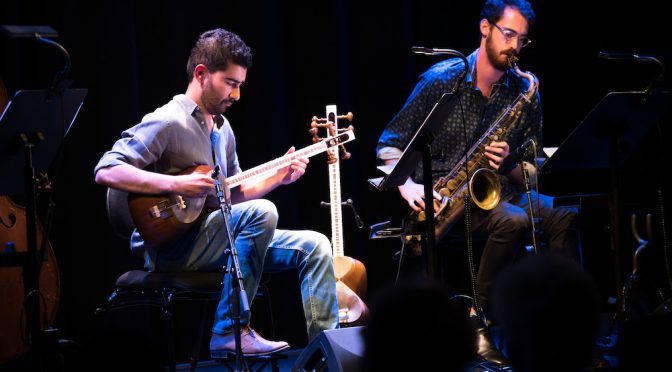 This wonderful performance felt like a blend of jazz and Sufi mysticism. It was a transcendent experience.

Hamed Sadeghi is the Persian-Australian tar player and driving force of Eishan Ensemble. Hamed Sadeghi’s background is in Persian classical music and on Friday night he focused on the tar, a guitar like Iranian instrument. He is surrounded by some excellent jazz players who have blended Middle Eastern and cosmopolitan sounds into their aesthetic to produce a genre defying fusion. Their skill, passion, intensity and playfulness produce a marvellous sound and a captivating concert.

PROJECT MASNAVI is the new album from the Eishan Ensemble and this was its world premiere. The Sydney Opera House is a wonderful and fitting venue for showcasing these beautiful and complex compositions inspired by the thirteenth century Persian poet, Rumi. Hamed feels that Rumi’s poetry is about freedom, a status that was severely limited during COVID-19 lockdown when Project Manavi album was being worked on.

The evening opened with a mesmerising tar solo before drums and double bass kicked in followed by the wailing saxophone and a swarming piano accordion to produce the delightful music that featured in this composition. Variations on this format followed but maintained throughout the night was the beauty and emotion of the performance which soared, seduced and transported this listener.

Hamed addressed the audience twice during the concert. Before the fifth piece of the show, ‘Lost in Flight’, he introduced the band Marcello Maio on accordion, Michael Avgenicos on saxophone, Max Alduca on double bass and Alexander Inman-Hislop on drums. He then explained about creating the album and the inspiration from Rumi’s poetry.

Hamed explained that being caught between his Iranian and Australian cultures made him feel that he was only his true self whilst on an aeroplane, hence ‘Lost in Flight’. He explained a little about his instrument, the tar, and how it is made from sheep skin and sheep bones. Hamed also spoke before playing the well-deserved encore, ‘Shiraz’ and how in the city of that name a bottle of shiraz is buried when a child is born and then dug up when the child marries. This beautiful story steeped in tradition, culture, celebration and humanity was not only reflected in the composition Shiraz but in the Eishan Ensemble’s memorable concert.

PROJECT MASNAVI opened at the Sydney Opera House on Friday 14th May and concludes tonight Saturday 15th May. It is thoroughly recommended.

All images by Cassandra Hannagan