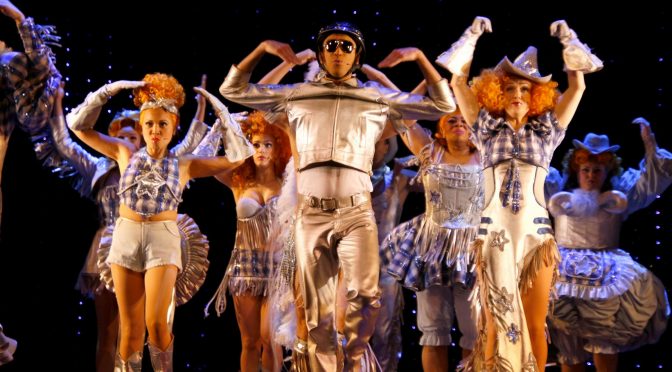 After playing 135 cities in 29 different countries around the world, Australia’s most successful homegrown musical, has returned home with performances which began at Sydney’s Capitol Theatre on Sunday 13th May.

Australian theatrical treasure Tony Sheldon is reprising the role of Bernadette which he has performed 1,800 times, earning Tony and Olivier nominations for the role. Joining him on the bus is David Harris as Tick and Euan Doedge as Felicia.

Featuring a dazzling array of more than 500 costumes, 200 headdresses and a continuous hit parade of dance floor classics including ‘It’s Raining Men’, ‘I Will Survive’, ‘I Love The Night Life’ and ‘Finally’, the fabulous camp production has more glitter than ever.

The iconic Aussie story about mateship, self-discovery was translated from screen to stage by Stephan Elliott and Allan Scott, directed by Simon Phillips, with the film’s acclaimed costume designers Tim Chappel and Lizzie Gardiner, alongside stage designer Brian Thomsen and co-choreographers Andrew Hallsworth and the late Ross Coleman.

PRISCILLA QUEEN OF THE DESERT is presented by the Michael Cassel Group and Nullarbor Productions in association with MGM on Stage.

All pics by Ben Apfelbaum at the Media Call.