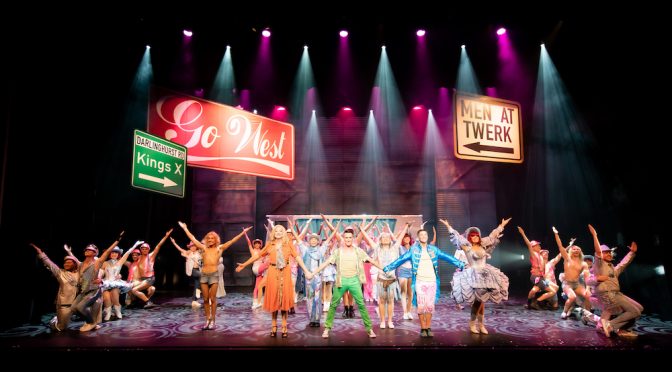 This is the first community theatre production of PRISCILLA to make it to the stage in New South Wales. It has been brought to the stage by the Willoughby Theatre Company, one of the state’s finest theatre companies. The Company has been around since 1957 and has built up a reputation for putting on great music theatre. The Company can now count PRISCILLA as being one of its finest.

The main character in PRISCILLA is Tick, a Sydney based drag queen. Earlier in his life he was a straight man married to a wife called Marion.

One day, out of the blue, he receives a call from his ex, Marion. Marion invites him to come up north to a town called Alice to perform his drag act at Lasseters Hotel Casino Resort where she is the Entertainment Manager. Marion has seen his drag act and loves it. Her main motivation, however, is for Anthony to spend time with his eight year old son Benjamin.

Tick’s life as the best drag queen in Sydney is already too busy. It might just be the time for a bit of an adventure. A month in Alice doing his shtick didn’t sound too harsh. He goes on a recruiting drive, and enlists two of his friends, Bernadette, a transgender woman who has recently lost his partner, and a younger drag queen Adam to join him in his adventure.

The trio set out on the long trip up north on a large tour bus which Adam christens ‘Priscilla, Queen Of The Desert’.

Above all, PRISCILLA is a great spectacle of sight and sound, and this is exactly what director Adam Haynes delivers with his production.

A multi award winning Queensland McIntosh developed and constructed the famous, emblematic pink bus. Using 200 metres of steel in the frame, Josh built the bus as lightweight as possible to make sure that it was easy to move around by the cast during and between scenes. The final bus weighed only 350kgs.

In something of a coup Willoughby Theatre Company were able to use all the costumes from Origin Theatrical Costumes, the costumes that were used in the international tour of the show. The stats on the costumes are incredible; the show features over 1,000 outrageous costumes and 200 amazing head-dresses!

Choreographer Janina Hamerlok did a good job ensuring that everyone made the right moves. Hamerlok’s program note : “I have aimed to inject every possible daggy disco move in her repertoire into the show. The result – a hilarious, energetic, extravagant, crazy, sexy, sparkle filled retro romp.” Exactly!

The show’s soundtrack features some twenty three pop and disco classic tunes. Everyone will doubtless have their favourites. I loved the rousing, foot stomping version of John Denver’s ‘Country Boy’, and the way over the top version of American composer Jimmy Webb’s 1967 way over the top, absolutely epic break up song ‘MacArthur Park’. The costumes for this sequence were stunning. This sequence was, in itself, worth the price of admission.

The show’s three leads were each triple threats.

Brent Dolahenty played Tick whose journey to feeling more fulfilled in his career and in his bonding with his eight year old son Benjamin is the show’s main journey. Dolahenty plays his relatively uncomplicated character well.

Tom Gustard performed well as the effeminate, flighty and rather obnoxious Adam (Felicia).

The three Divas who spend much of their time hanging suspended from the top were superb. They were Nikole Music, Jessica Zamprogno and Karen Oliver.

Matt Gavran gave a fine performance as the tough miner bloke Frank who takes a shine to the travelling troupe, and in particular one Bernadette. Gavran was convincing playing a part much older than his age.

Oliver Roach impressed in the role of the graceful and glamorous Farrah.

PRISCILLA does go back in time a bit. The film came out in 1984. The musical adaptation didn’t premiere till 2006. It has taken till 2021 for it to receive its debut non professional production. And  in the hands of the Willoughby Theatre Company it is a winner and just great fun!

Willoughby Theatre Company’s production of PRISCILLA QUEEN OF THE DESERT THE MUSICAL plays at The Concourse, Chatswood until Sunday May 30, 2021.