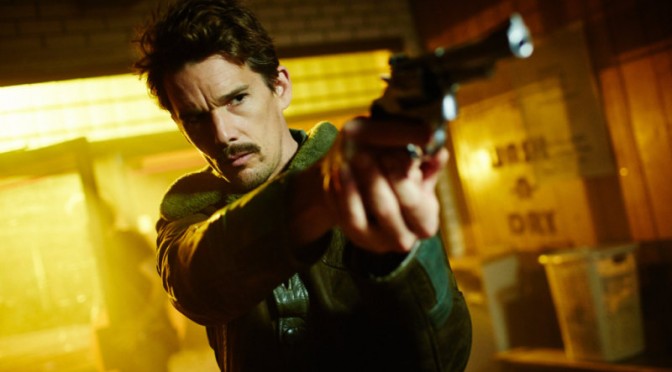 Brothers, can you spare a paradigm?

Look, all you zombies, there’s a game changer in the retro time travel movie genre and it’s been made right here.

Written and directed by the Spierig Brothers, Michael and Peter, who freshened up the vampire genre a few years ago with Daybreakers, PREDESTINATION is a marvelous head trip that taunts, intrigues, entertains and thrills.

Stunning and sensational is Sarah Snook starring as a predestination paradox, the missing link in a paradigm being explored and investigated by a Temporal Agent played by Ethan Hawke. He’s on the trail of a mad bomber whose identity is a puzzle thats solution is more explosive than the devices detonated.

Think Minority Report, think Terminator, think Looper, think Blade Runner and you have some idea of the heritage of this movie, its DNA hereditary double helixed into the Chrono synclastic infundibulum.

Based on a Robert Heinlein short story, All You Zombies, the talented twins have expanded and adorned the tale producing an exceptional piece of cinema.

Beginning with a thriller opening that suggests a Thirties spy yarn, the audience is then fed morsels of tantalisation about that sequence, and its aftermath. Time has passed but how much?

Then a bloke walks into a bar, barters a bottle from the barman by promising to tell the most astonishing story he’s ever heard. That story is played out for us to see and is deserving of the bottle. But the storyteller gets more than he’s bargained for and he, the bartender and the audience are catapulted into a caper that zigzags time and space.

Apart from the top notch performances from Sarah Snook and Ethan Hawke, PREDESTINATION suffers no pedestrian portrayals and boasts a terrific supporting cast which includes Noah Taylor as an enigmatic government major domo and Christopher Stollery as a steely interrogative interviewer.A first rate production design by Matthew Putland, who designed the Spierig’s calling card feature, Undead, evokes the epochs that evolve and elasticise in this retro-ethereal, neo-noir realm and Daybreakers cinematographer, Ben Nott nails the look to the mast.

See it once, you’ll want to see PREDESTINATION again, for clarification, verification and another dose of exhilaration.

A brain stretching, retina burning, ear worming serpentine experience, PREDESTINATION is an intelligent entertainment from a formidable fraternity of filmmakers.

PREDESTINATION is in the running for this year’s AACTA best feature film award.