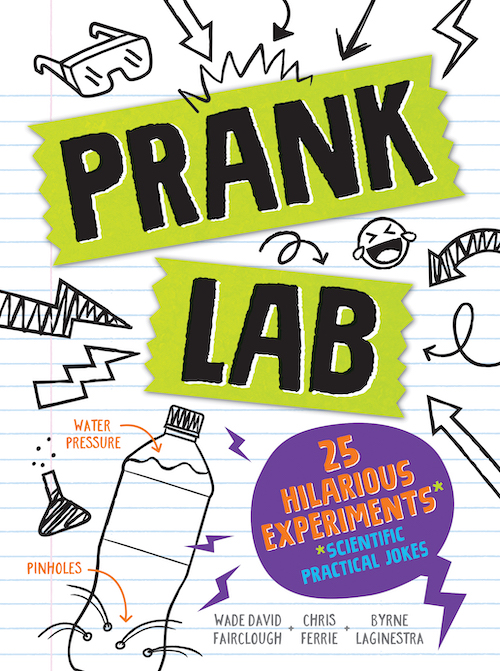 This is a marvellous little book.  It contains 25 ‘Experiments’, moulded into 25 fun pranks. Each one starts with its scores in five categories: VICTIM  MESS  DANGER  FUNNINESS  SCIENCE followed by warnings, such as ‘This is a guaranteed messy prank! Have towels nearby and always help your victim clean up (after laughing of course)’. Typical victims are Dad, Math teacher, sibling, people at a party.

The book is a delight because, although the experiments are couched as pranks and tricks for youngsters, there is something informative for everyone in each one.  Brief panels DID YOU KNOW, FAST FACT, SCIENCE FACT, QUICK QUIZ are loaded with interesting, educational and historical information about, for example Aristotle, Isaac Newton, Coca Cola, Thomas Crapper, Egyptian toothpaste around 5000BC, soap operas, the origin of the word ‘buck’ for a dollar and the extinction life forms. We were amazed to learn that the die (one of a pair of dice) with the most sides has 120! and is called the disdyakis triacontahedron.  The ‘Cheater’s Dice’ trick with non-transitive dice is impressive.

At the end of each experiment there is a panel with review, documentation and further questions from which the youngsters will unconsciously pick up the essence and practice of science.  The book contains a short glossary.

This book is invaluable.  Every family and every primary school classroom should have copy.

The three authors are science communicators. Chris Ferrie is a Senior Lecturer for Quantum Software at the University of Technology Sydney. Byrne Laginestra is a science teacher at Cherrybrook High School. Wade Fairclough is a science teacher and his blog  ‘Wade Into Science’ has appeared on ABC radio across the country, including ABC Radio’s ‘Beyond the Lab’ and ABC Radio Queensland.

PRANK LAB, written by Wade David Fairclough, Chris Ferrie and Byrne Laginestra,is published by Sourcebook Kids in America (hence the American spellings and flavour) and distributed by Newsouth Books, an imprint of the University of NSW Press.