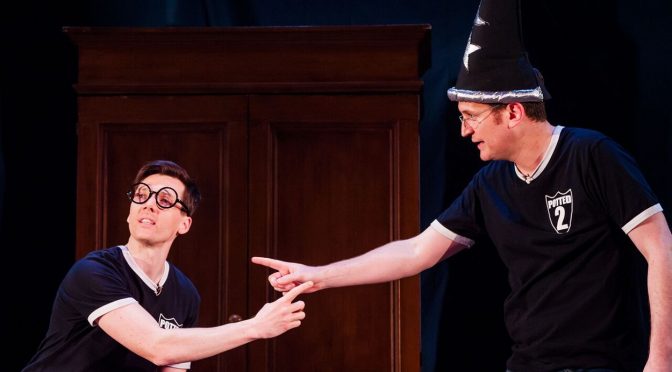 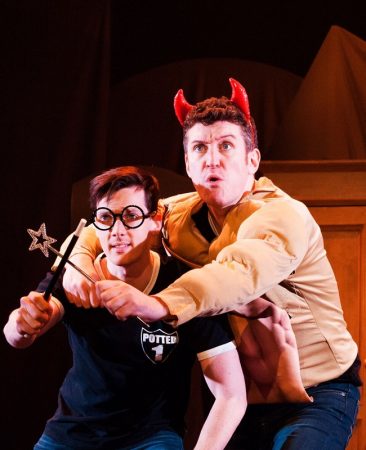 Grab your wand and Wizarding robes, Accio your ticket and Apparate to the Seymour Centre for the return season of the wonderful POTTED POTTER . It has been touring internationally to enormous acclaim since 2005 .

Described as ‘The Unauthorised Harry Potter Experience’, it is a charming, witty and affectionate parody, enchanting fun, condensing all seven books in the enormously popular series by JK Rowling into 70 minutes, and includes snippets of dance, special effects , humour , audience participation ( and Quidditch! ) to create a hugely delightful experience for both witches wizards and Muggles .

There’s a rather light plot that threads through the narrative of POTTED POTTER . The show begins with Scott Hoatson on stage reading waiting at platform 9& ¾ while Dan Clarkson moves among the audience . We learn that Scott (Scott Hoatson) wants to put on an epic mega theatrical version of all seven Harry Potter books with a huge cast and glittering special effects , so he orders Dan (Daniel Clarkson) to seek a cast , assorted props, and a set for his magical vision. However ,Dan splurges all of the  budget on an animatronic dragon , ( this becomes a running gag) so the duo are left to put on a two-man version of every book. Which they do, with great energy, warmth and enthusiasm .

The banter between the two of them is wonderful,( also with the audience particularly in the Quidditch match ) and this is one of those shows where we gather the performers enjoy it as much as the audience .

Simon Scullion’s set includes a huge brightly coloured toy train ( representing the Hogwarts Express), a wardrobe ( apparently from the Chronicles of Narnia rather than hiding a Boggart ), and a ‘ spooky’ coffin (not really related to anything Harry Potter according to Clarkson ,) and other assorted  items .Tim Mascall ‘s lighting and the sound (which features an original score by Phil Innes) are most  accomplished and effective.

Dark haired Hoatson assumes the role of Harry Potter for the show which means    Clarkson has to play every other character in the entire Potter world. He becomes  Ron and Hermione, as well as Snape , Dumbeldore , Malfoy ,Tom Riddle, Lord Voldemort  ,Mad-Eye Mooney, Sirius Black, Lupin, the basilisk, Hagrid, Dobby, and various other characters as well. ( No Professor McGonnegal or Dursleys though) .

In one breathlessly fast section summing up Book Six, Clarkson somehow manages to play almost all of them in blisteringly quick succession to Turner’s Potter, using a wardrobe that is part of the set (he claims he thought it was needed to get to Narnia – but was a Boggart hiding in it ?) rapidly changing silly hats and wigs, or funny props as he further distinguishes the various characters with crazy voices. There is also the hilarious section in the Quidditch game where Turner is dressed like the Golden Snitch .

A running gag throughout the show is Clarkson’s desire to have Quidditch match on stage and Hoatson’s response that that is almost impossible – but of course eventually there IS a game of Quidditch with the audience divided into Gryffindor and Slytherin and a huge floating globe ….

Book Three ( Harry Potter and the Prisoner of Azbakan) is summed up in a very few minutes with the help of a nifty hilarious cartoon , using the ‘inside’ of the wardrobe as a projection screen .

When Harry (Hoatson) and Voldemort (Clarkson) square off in a wizarding duel at the end , a disco ball lights their defiant karaoke version of I Will Survive .

What we all want to know is when will Sydney get the stage version of Harry Potter and the Cursed Child so we don’t have to fly interstate to Melbourne to see it ?