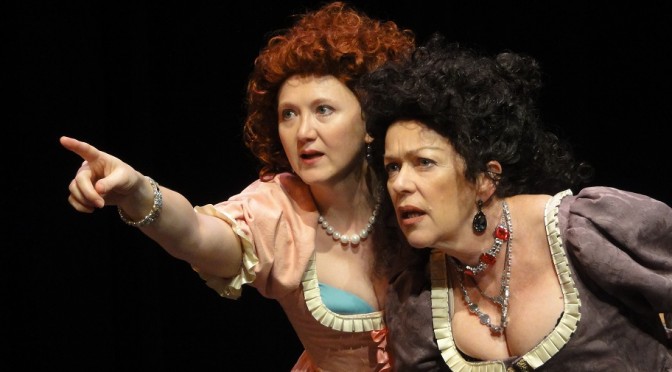 POSSESSIONS is a brand new play, channeling the two Mancini Sisters, Marie and Hortense, as devised and written and performed by Jane Bergeron and Carrie Ann Quinn together with a fine ensemble cast that includes Frances Attard, Morgan Davis, Samantha Stewart and Shane Waddell.

This production is playing now at the King Street Theatre in Newtown for a very limited run. The show premiered in the USA at the Boston Playwrights’ Theatre in June 2013. I strongly recommend seeing this acclaimed production of POSSESSIONS with its ambitious quick juxtaposition of moods and settings that bring their history to life.

The Mancini sisters came from one of the richest, best-connected, most celebrated families in Europe.  The planned journeys of their lives were being mapped out for them by their parents. This included choosing for them both husbands of noble birth and political power.

POSSESSIONS reveals a story  that shows their lives played out very differently than was planned. The Mancini sisters suffered from abuse from their husbands, they needed to become brave and very independent noblewomen, due to the royal power exerted by the rich men that they married. Both unions were unhappy, the powerful co-dependent husbands, were both jealous, controlling, dysfunctional and cruel.

The powerful and provocative sisters ended up living scandalous lives, in and out of chateaux, courts and for years as a virtual prisoner in convents, they both wrote and published tell-all autobiographies, thus providing incredibly detailed information about the lives of royal noblewomen in France and in Italy.

In the seventeenth century, both Mancini sisters became notorious for abandoning their aristocratic husbands, plus for travelling across Europe unchaperoned and for dressing as men. Even more shockingly, they attempted to salvage their tarnished reputations, by writing and publishing their memoirs.

Co-writer Jane Bergeron reflected on the process,  “We really felt we knew them Both Carrie and my marriage ended in divorce. Are these women’s stories relevant to today? We’re living proof, because we have had very similar experiences.”

Well constructed, strong performances and very convincing unique piece of history. Vividly brought to life in this wonderful theatre play, with captivating, visceral performances by the cast. Interest is constantly sustained. Expertly weaved together on stage, all about the royal sister’s scandalous lives and deeply explores the relevance of their battles to today’s modern women.

A gold framed painting of the real Mancini Sisters, changes throughout the play to show many events and people in their lives, complete with modern songs by Beyoncé and Paul Simon used to great dramatic effect, including “Fifty Ways to Leave Your Lover” shown on several fake Wikipedia web pages.

Clever set design, with quick changes of costumes. The structure of the play is tight, and moves quickly.