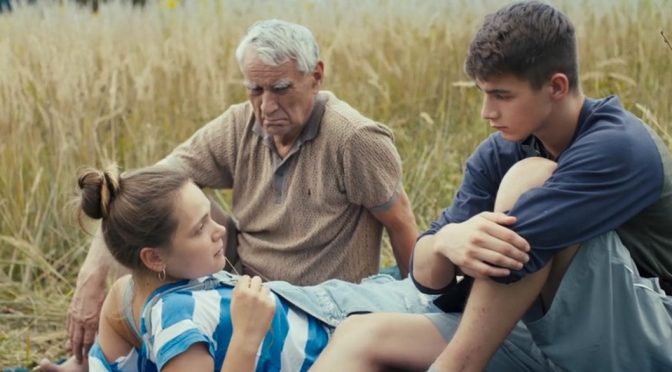 Summer holidays. Harbinger of romance. Crushes with contemporaries. Your rival isn’t usually your grandfather but in EVERYONE HAS A SUMMER, 17 year old Mirek is in competition with his 70 something granddad when rebellious Agata comes to a small town to work at a religious camp for teenagers and youngsters.

17-year-old Mirek is smitten by this sex kitten, while his grandfather, who suffers from dementia sees in her his long-gone lover. In a strange strategy, Mirek uses his grandfather to get closer to Agata.

Intoxicated not only by her beauty, Mirek admires Agata also for her representation of the liberal millennial generation confronting the old fashioned, Catholic, conservative values clinging like rotting cadavers to the small industrial town.

Repression is rampant, personified by Mirek’s mum who is the organist at the parish church. However, when her organ is in need of fixing, she becomes enamoured of the repairman, which is reciprocated, and soon he is the instrument of rekindled libido in the pipes pedalist.

Tomasz Jurkiewicz director, screenwriter is not subtle. He lays on the phallic symbolism with a trowel, so the tone of the film is as if laid out by the 17 year old sex obsessed Mirek.

EVERYONE HAS SUMMER is part of the POLISH FILM FESTIVAL SYDNEY running through to June with a strong line-up of critically acclaimed films screening across two cinemas, Palace Norton Street and The Ritz Cinemas.

The program brings two Australian premieres, six NSW premieres and a broad selection of work by a new generation of incredibly talented Polish filmmakers. Get ready for smart comedies, gripping dramas, awe-inspiring biographies, a timeless classic and a treat for the young audience.

Full program is available at http://www.polishfilmfestival.org/sydney