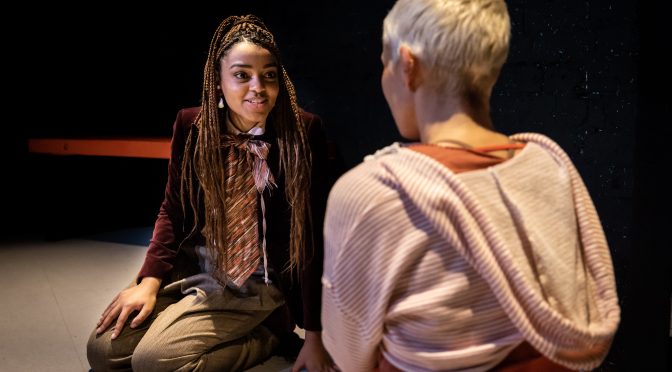 POINT8SIX is a rare performance piece, exemplifying what is best in Melbournian theatre. It is dedicated, skilled, uncompromising, literary exploration of themes of power, technology, history, along with time travel, shifting identities, cosmological horizons and micro perceptual. Tim Wotherspoon has written a complex weft of action, comedy, music interlude, drama through a bold yet intricate warp of attuned poetry. It is great to see such an unashamedly literary work providing a springboard to the collective talents of such an outstanding cast so well versed in stagecraft.

The story has to do with 1971 Berlin, 2142, totalitarian regimes, two sisters engaged in revolution, and a refugee scientist trying to retrospectively change history through advanced technology. Enticing?

Tim Witherspoon was superb as the scientist Harrison, Annabel Marshall-Roth as Maidie, Rebecca Bower as her sister Charlotte, were joined by Matt Fulani, Leigh Lule, and Lliam Amor, in a superb ensemble. The show bordered on the multiform (not easy in the small La Mama space), with projected real time monologues, as well as rich and rapid lighting (Kris Chainey) and audio. Kirsten von Bibra kept a steady deft hand as the director, and also contributed to the set design.

The effect is a wash of effects, of words, lights, projection, sound, that seduce to one extent as they become incomprehensible. To one extent the show inherits the linguistic liberties of absurdist or surrealist drama, stand up comedy, performance poetry, poetic drama or cabaret formats, while not succumbing to either the bald faced empty ambiguities of Pinter, or the forced joy of the circus cabaret. Poetic stand up is a useful commencing tag, complete with audience harangues done with sublime linguistic teases. Yes the characters are so far over the top that they are out of the tent of theatre or comedy – is this a play we see or some other unnamed genre? The intellectual and artistic exuberance produces a “jouissance” that overrides the  gravity of the show’s themes and supports the possibility of creation induced redemption. One cannot dwell on death or power only skate on their surface in excess of creativity. Are times so desperate that we must rely on art for hope? The show can be taken to suggest as much. Or does it not even offer hope?

One cannot entirely comprehend the form of the piece any more than specifics of expression. It is not easy to slot the show into an existing style, something a reviewer should at least try to do. To that extent the show tilts at being original, and its writing, at something more than brilliant.

Of course we might like to dwell more easily at times within a space wrapped in language. I mean, contrast is an old adage of theatre, and there is also the danger of cryptic self referencing in the text. The latter might have a place in poetic personal or confessional utterance, but in the collective forum of performance does poetry need to be pruned in its delivery, in the same way as poety needs to be shaped as a song lyric? What needs to be considered for meaning making in an audience? What is performance poetry if the text cannot be digested enough, or puns fully enjoyed, or rhythms sometimes suspended. After seeing it one wants to read the text of this show – which in itself is a compliment – but is that entirely a good need? Where on the spectrum of diction does enunciation need to be? Likewise volume, and physical and facial expression? All are present in abundance and bucketloads, serving as a mattress of delivery by the talented cast.

To be frank I don’t know. I like abundance and richness especially, where it is not merely lyrical and redundant, and where it is playing with mystery and politics (Shakespeare knew that trick). I also don’t care. I make no judgment from a privileged reviewer perch and instead stand to reflect and learn more about this bold experiment. I am more intrigued, as a writer, to learn about craft, and as a reviewer and audience, to see how this writer further develops, what sort of works and themes follow on from what can be seen as an exciting hyper preview of an ongoing oeuvre?

I saw the performance of POINT8SIX at La Mama in Melbourne on June 5, 2022.