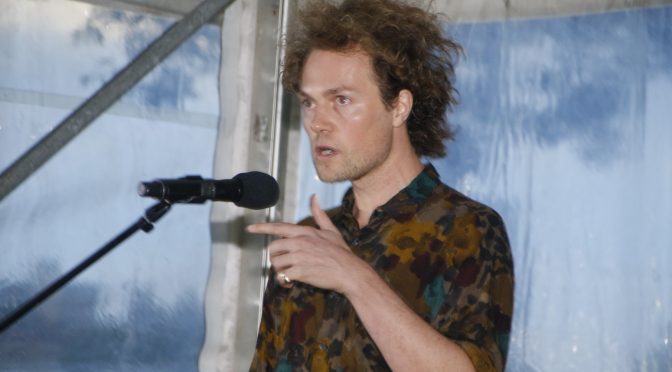 Attracting  politicians, poets and high school students, the Poets Picnic was held at the beautiful Blackburn Gardens adjacent to the Woollahra Council chambers and the former Woollahra Library.  Both the crowd and the poets were in a celebratory mood as this was the 30th time that Woollahra Library had hosted this event.

In honour of this occasion beautiful cupcakes emblazoned with the number thirty were handed out to those participating in the picnic.

Another veteran of the Poets Picnic was ABC presenter Simon Marnie who emceed the poetry performances for the 18th time.

The theme of this year’s poems was Change but as is the case with free wheeling poetry not every poem stuck to this subject. Naturally nobody minded as the spectators enjoyed a balmy night in the most beautiful harbour side setting with white cockatoos circling above and birds song complemented the lovely oratory of the poet presenters.

The proceedings were kicked off by Mayor Peter Cavanagh introducing the local member Gabrielle Upton who read the poem ‘Change’ by Kathleen Raine. Others such as Mark Tredinnick, Fiona Wright, Arielle Cottingham, Toby Fitch, Holly Friedlander Liddicoat, Judith Beveridge and Geoffrey Lehmann read out their own poems and high school students from Ascam- Mimi Kind and Eliza Howard,  Kambala- Natasha Ludlow and Anoushka Saunders, Moriah College –Jasper Gabay and Beck Rosen and Kincoppal – Isabella Zaide and Angela Della-Franca demonstrated that poetry was alive and well in the hands of these youths. From Kambala, Anoushka Saunders read one of her own poems  entitled life is messy. The others selected their favourite poems ands accordingly performed their favourite works with great sensitivity, emotion and feeling.

The proceedings were brought to conclusion by Woollahra Library Manager Vicki Munro and the capacity crowd  left the gardens under a appropriately lyrical purple and red  twilight sky.

This enduring event which one attends for free is a precious jewel in Sydney’s cultural life.

All pics by Ben Apfelbaum ©