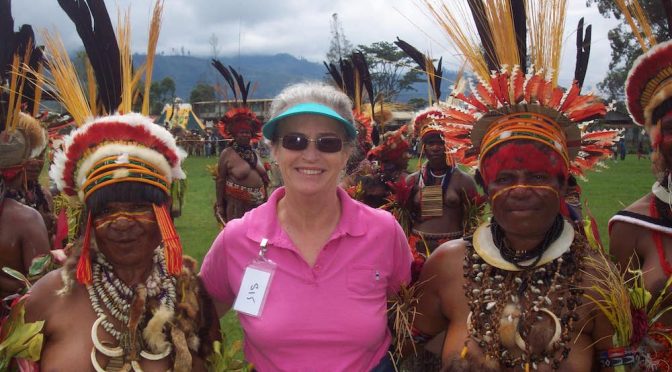 Papuans have been selling their arts since the 1850s. The villagers are the skilled creators of the artefacts and experienced business people working in harmony with Australian traders. They have a very pragmatic approach to the objects they chisel, paint and sculpt. The money the creators earn from selling their art is their sole income in many remote villages, usually paying for school fees and medicines.

All traders must have a license from the regional Museum or from the Port Moresby Museum. The trader then buys pieces from the village and gets a permit to export each individual piece. If coming to Australia, every item is fumigated, sometimes gamma radiated and often put in quarantine. If a piece is going to be forwarded on to an exhibition in Paris, New York or elsewhere from Australia, it doesn’t have to be fumigated a second time because the world knows Australia has a rigorous border protection system. No wood worm gets past us!

Collecting in New Guinea is nothing like what most people imagine. Trader and collector Warren Campbell explains: “It’s not like western culture where things run smoothly, usually to time, under elements of order and structure. In New Guinea, you just need to go with the flow and keep your wits about you. The hired car or carved wooden dugout canoe may come or it may not arrive; your hired help may show up or they may not. Everything is negotiable. Almost everything has a price (even taking a picture) and Papuans are some of the most skilled negotiators in the world. They know exactly what a person’s needs are, and how to get the most out of them. Often a price is lowered as a strategy (to twist my arm to buy more), knowing full well I will then require a second dugout canoe to assist in shipping the pieces back down the Sepik River.

Coincidentally, the second boat and crew are negotiated at 10 to 20 times higher than the cost of the original canoe. After lots of rigorous discussion we come to an agreement beneficial to both parties. There are no hard feelings in these exchanges. It’s all part of the magical dance in PNG. Intense negotiation is just part of the culture and something you get used to over time. When negotiating with the tribes, they will often walk away and return hours later (after significant deliberation), or frantically wave their arms around in acts of frustration. They might talk loudly signifying to the whole tribe to ready itself for warfare. Weapons can be displayed to evoke power (bows, arrows, daggers) but know this, it is all part of the delicate dance in PNG. It’s all very strategic, part of their culture and very, very smart. I have come to love the dance as much as I love the people and the pieces. It is truly another world.”

Warren continues “We are committed to supporting the people and traditional cultural practices. We know there is a market for both older tribal works as well as traditionally made, contemporary pieces that are original works of art using sustainable practices as they have for hundreds of years.

“High quality modern pieces are sought after and valued for their spirituality and celebration of a continuous, living culture. The pieces speak for themselves as unique and varied artworks imbued with the magic of centuries old belief systems. The belief or myth and magic behind each piece still exists for carvers. The master carvers of PNG still practice their trade in carving traditional pieces for ceremonies and celebrations, however Western influences over the years have had an impact. Pieces like walking sticks are not traditional carvings. Some carvings were influenced by Westerners coming off boats, whereby carvers saw an opportunity in what Westerners were using. Therefore, carvers started carving specifically to appeal to the Western markets. So I think that if they can’t sell items to Westerners, it will change the subject matter to pieces that have more meaning to locals and their own culture. We must remember that trade amongst tribes is part of their culture, as was finding what appealed to those who traded with them. Culture is a living thing, and will respond to the influences of world events.  One friend of ours was trying to get his tribe in New Ireland to stop greeting him with a traditional ceremony, to ‘modernise’ them. I hope they succeed in modernising him, by showing him the value of traditional ceremony in the 21st Century.

Here are some of the current Australian traders, in alphabetical order.

West Australian Richard Aldridge became interested in PNG people and artefacts while working the Highlands as a geologist. He has seventeen years of experience collecting and trading artefacts. He usually travelled alone with a local guard, occasionally with armed police. He speaks Pidgin fluently. His collection are pieces that were made in the traditional way, used in the traditional manner and represent the true culture of village life.

Todd owns Oceanic Arts Australia, currently Sydney’s only Oceanic Art Gallery. “I have been running a gallery in Sydney since 1988 and field collected extensively in West Papua. My artworks are in the National Gallery of Australia, the South Australian Museum, the Australian Museum, anc the Musee du Quai Branly in Paris. When you enter the Oceanic Art Pavilion the first artworks you see are monumental Ancestor Poles from the Asmat and Mimika regions along with their Shields, Dance costumes.”

Alex buys and sells pieces in the high end of the market from museums, auction houses and private collectors. “I have collected tribal art for about 45 years  and love New Guinea art. I run a gallery here in Melbourne, open by appointment. I do not source any art from PNG but instead look around the world for early collections and pieces that come on the market or that come up for auction. I only have items that pre date 1940s.”

Australian Warren Campbell operates Bubble Artefacts from Coolum Beach in Queensland. “I have been drawn to the Oceanic Arts for over 15 years, mainly collecting prior to selling. I started with a mask in which I had no idea as to what country it was from or the meaning behind the piece. I was purely struck by the beauty of its form in which I wanted to understand more. I started reading more about the culture, the people, the history and along the way found out the piece I had was a mask from the Boiken area. From that moment on, my passion for the ‘myth and magic’ of their stories, the art has led me on many fascinating journeys chasing this obsessive passion to understand more about the tribes of New Guinea.”

Australian Chris Boylan’s parents worked in PNG and he has been returning there regularly since the 1970s. Chris has exhibited in Paris, London, Philadelphia, San Francisco and London and elsewhere. He recently organised an exhibition of contemporary Phantom Shields of the New Guinea Highlands  at the Michael Reid Gallery in Sydney. “The Phantom Comics became hugely popular throughout PNG and the sign painters began appropriating the Phantom by putting him on shields. They’ve stirred quite a lot of interest among collectors and Museums. around the world. Most world class museums would have a Phantom shield.”  They aren’t used as shields. It’s contemporary art that’s fun, tells a story and has deep cultural importance to the creators.

The Phantom comics were published daily in the newspapers and many learned to read from them. There was a fascination with The Phantom resulting in painting the image on shields used in battle. That then morphed to painting shields for the joy of it and as contemporary art. This is one of the many clips about Phantom shields: www.youtube.com/watch?v=-UwyYOz9ZmQ

Now that touring the rivers, coastline and highlands is easier and safer, more people from around the world take organised tours to buy from villagers directly. Meeting the creators ensures that the tourist will value the piece far more than if it had been bought online or at auction. The heroic effort of getting to the remote location heightens the personal appreciation of the piece.

And, the pool of collectors buying and selling has also grown due to younger people getting involved, aided by apps and online auctions.

Significant private collections are in France, England, America, Australia, Japan, and increasingly China. In Australia, here are probably a dozen people who have over a hundred pieces, and three or four who have thousands.

Sir David Attenborough is probably the best-known collector of PNG artefacts.  Every time his collection is mentioned in the media, there is a burst of interest, and more people discover PNG creations.

Some collect to sell in the market for a profit. Others collect simply to be surrounded by the expressive beauty of the objects. Others collect to help the PNG people. The money that comes from selling artefacts is an important source of income. As Warren Campbell says, “It’s people like me that are helping keep these traditional arts alive. I can help reach a broad market not easily accessed by villages that don’t have reliable services and utilities like the Western world. I can market these pieces to potential buyers. It’s a win, win.”