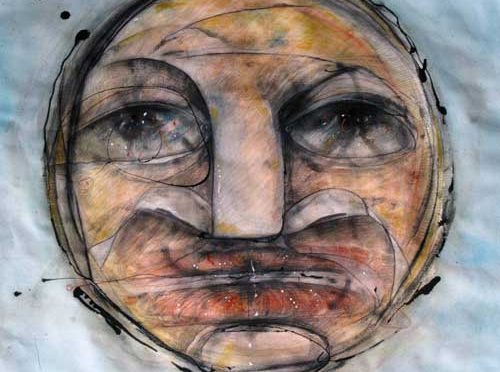 ’If you crave a sense of clarity, my world will only seem like a buxom calamity. Starring roles are allocated to my mortal painted motley swirls most delightful in their eventual decay, ready and able to be recklessly tossed about and spoken for by you. For my abstracted walls no longer belong to me, they never did, they never will.”

The above is a quote from Anthony Breslin. Breslin has been working professionally since the late 1990’s and has held over 50 solo exhibitions both internationally and nationally. His use of mixed media includes items such as toothpaste, jigsaw pieces, paint tubes, pencil sharpeners , paint tin lids and paint brushes , swirling paint often combined with paper and cardboard in collage like three dimensional results. His inner visions are projected onto a colourful, abstract, fantasy world with whimsical creatures and bright, figurative structures.

The current exhibition is bold, colourful and explosively powerful, completely dominating the gallery with his solo exhibition. Don’t forget to look outside street-side too , as some of the works face the street (a case in point is a large bold and vivid green Frog).

Some of the works are quite large, others are small tiles. The eponymous work PLIGHT OF THE PURSE FISH is bold and colourful – if you look closely you can see that Breslin has used multiple materials including paint brushes and Lego in an expansive multi-media work.

There are three portraits that are classic examples of one particular style Breslin frequently uses – a distinctive round face, huge eyes and long nose. The works are – Beckoning the Bits, Croptic and Yeildsville. In some ways they are Davros like with their haunted dark eyes.

The exhibition features  some sombre, very dark works including Zeerox, Pushkar and Forenzic.

Blackateer is a large work full of wonderful assorted textures but is mostly pencil on folded and/or cut paper to create the collage.

The Dailysis is a Pollock like work with its dripping texture but the eyes of the person are haunted. Breslin himself has been battling leukemia and recently closed his gallery in Melbourne.

Balls, as in billiard balls, sees the balls career across the cast cement slab, and they are depicted in great detail.

THE RUSSIAN is distinctive, vibrant and alive, in his earrings , sunglasses and punk hairdo.

Vinthook has a Surrealist or Futurist feel to it.

There is a group of six colourful skulls in various colours (white, pink, orange with purple Background) that are relatively small in size but are very dynamic.

There  is a book available at the exhibition entitled Frantic Bloom.

Anthony Breslin’s THE PLIGHT OF THE PURSE FISH is exhibiting at the  Traffic Jam Galleries, 41 Military Road, Neutral Bay until November 24.