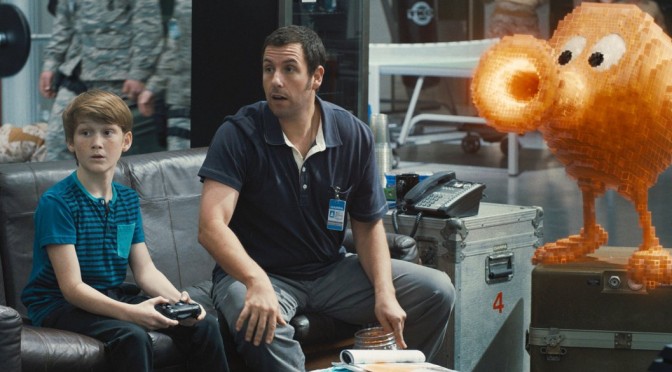 PIXELS the movie, you should only see this movie film in the 3D version, or the IMAX 3D version. Watching the 2D version, the computer games images are very flat, and look no better than when seen on computer screens in the 1980s, or when seen today on computer simulator versions.

The film immediately reminded me of the movie GHOSTBUSTERS.  Instead of killing ghosts, these protagonists, because they are nerd gamers, are able to kill the invaders’ video game characters.

PIXELS lacks all of the humour and infinite repeatability of GHOSTBUSTERS. Hollywood yet again reminds all the inhabitants of Planet Earth, that only white Americans can save us from alien invasion!

The film has a Parental Guidance censorship rating because PIXELS has language with sexual innuendo and suggestive comments/actions plus some visual content that is unsuitable for children under thirteen years of age.

Coitus with a video game character resulting in pregnancy is implied after a nursery scene is shown. There is plenty of aggressive language with the use of words like “bitch”, “sluts”, “asshole”, “shit” and “pussy”. Children could become disturbed from hearing the language and seeing the not-subtle misogyny, homophobia and racial fetishisation throughout.

The storyline…Misinterpreted as a declaration of war, aliens send back to earth our well-loved low resolution 8-bit video-game characters from 1982, to destroy the planet. The aliens base all their attack methods, after watching 1982 arcade game playing footage sent out from our solar system by NASA in 1982.

The visual special effects are impressive and believable. The absurd plot premise is unique but very forgettable. Video game cheat codes, have a pivotal role in the final conflict.

I would advise staying to watch the end credits roll, throughout there are low resolution 8-bit video game animations.

If in 1982 you played these Video Arcade Game titles – Centipede, Pac-man, Donkey Kong, then you will appreciate PIXELS and be fully able to enjoy the nostalgic ride, in this pop-culture homage to video arcade gamers.