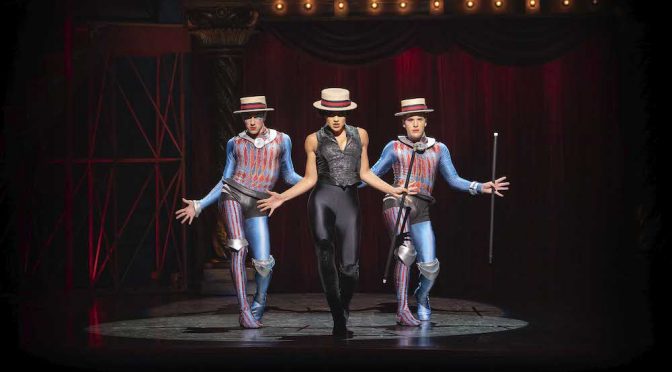 A revival of the 1974 Broadway hit musical ‘Pippin’ is the show lighting up the Lyric Theatre at the Star for the first time since the Covid 19 virus hit back in March this year.

In the show we follow the title character’s journey. When we first meet Pippin he is fresh out of university and  is intent on making his way in the world and finding meaning and satisfaction. He tries different things which satisfy him for a little while and then he moves on, ever restless.

Where will he end up?! Who knows? The Leading Player thinks he does. He is the other lead character in the show, and in his head he has Pippin’s life all mapped out. Together with his performance troupe they interact with Pippin and play out scenes from his life. The Leading Player believes he is in control of everything, that is until Katherine comes along…

A highlight, an essential element of the show, is the performance troupe’s exuberant excursions into a wide range of circus acts.

Stephen Schwartz’s score features good show tunes, the stand out being  the aspirational ‘Corner of the Sky’.

My pick of the performances. Ainsley Melhan impresses and is unfaltering in the lead role of Pippin.

Gabrielle McClinton reprises the role of Leading Player which she played on Broadway and gives a compelling performance.

Kerri-Anne Kennerley showcases a good singing voice and deft acrobatic skill as Bertha. ( On Wednesday 30th December Kerri-Anne had an accident on the trapeze and sustained a serious injury. Since this performance she has been replaced by a understudy).

‘Pippin’ is more than a little on the dark side but the sheer energy and wizardry on stage makes it a winner.

‘Pippin’, music and lyrics by Stephen Schwartz and book by Roger C. Hirson, directed by Diane Paulus, is playing the Lyric Theatre at the Star until Sunday 24 January 2021.