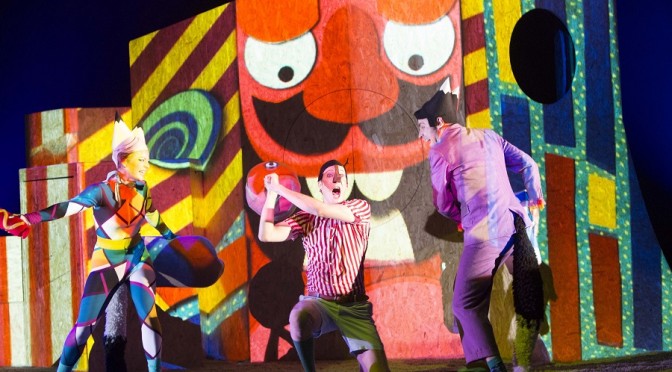 ‘Are you brave enough to be real’?

A fabulous bright bold and colourful re telling of this much loved Carlo Collodi story for all ages that enchants .Yes , this is still a very moral story , of a little puppet who wants to be real , about not telling lies , with the extendable nose and there is also a subtle anti-bullying message.

Windmill’s staging under the brilliant direction of Rosemary Myers was wonderful including some terrific use of film , shadow puppetry , revolves and other exciting special effects . There are various revolves,  peepholes , doors etc in the multi-level set which is based on a tree trunk. It was all colourful and stylised (the waves for example were Hokusai like).

At times it was scary particularly in Playland when Pinocchio discovers the truth about the poor donkeys. Other times it was much fun and funny – the children in the audience loved it . Musically its range varied from sort of Wiggles , showbiz ,pop/rock to soft ballads etc and was splendid. (None of the Disney songs from the well known much loved movie are included .) The choreography was tight and included ‘tutting ‘.

There’s plenty of emotional interaction with the audience , including things for cynical adults ( eg Stromboli being willing to sell his own grandmother as the cliché goes and also Stromboli’s cold hearted determination to turn back Gepetto’s small dinghy ) and the dialogue has puns and dad jokes and combines wit and innocence .. There are local and modern references to the Logies , ‘Fitness First Fox’ and upset superstars thumping paparazzi for instance .

Man of a thousand voices and masks the extraordinary Paul Capsis has a fabulous time as the villainous , malevolent Stromboli the richest man in the world . ( He ranges from school zebra crossing man , a devilish puppet master wreaking havoc pulling strings , the captain of a huge ship to flamboyant film director and more … ) it is interesting to note he is the only character in white face makeup.

As Pinocchio the wooden boy with a heart, tall gangly Nathan O’Keefe is superb. Naughty and cheeky he has much fun stopping the show in Act 1 when totally bored and fed up with school with ‘I Know ; A typical small boy he is embarrassed when being dropped off for school by his parent and he wants the most expensive ‘cool’ shoes around ( Romper Stompers oh yeah everyone has them ).Along the way he grows and learns many hard lessons .

As his father Gepetto , a lonely aging man, Alirio Avarce in Australian green and gold was terrific.

Diminutive Danielle Catanzariti was wonderful as the mysterious Blue Girl , who we see tragically meet her end joyously riding a motorbike right at the beginning . Is she a bubbly ghost or ?

Pinocchio’s other animal friends Kitty Poo and Foxy are brilliantly played by Jude Henshall (in Harlequin like diamonds who wants to be a huge pop star and sings gloriously) and cool , snazzy ,wily and slick Luke Joslin in a shiny retro 1950’s J.O’K suit . In some ways they are cousins to Mungojerrie and Rumpleteaser from ‘Cats’.

Cricket – as delightfully puppeteered by Jonathan Oxlade – is tremendous and acts the moral compass for the show.

This version of Pinocchio is a contemporary yet timeless telling of the story that is in fact quite dark at times but wonderful .Thoroughly recommended .

Based on the Carlo Collodi books, and adapted for the stage by writer Julianne O’Brien and director Rosemary Myers,  PINOCCHIO  runs at the Sydney Opera House 13 April – 4 May 2014  Running time 2 hours 10 mins (approx) including one interval