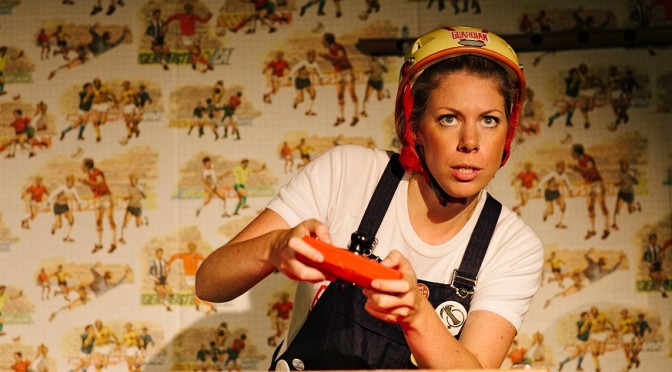 The ongoing debate about same sex marriage and parenting is still in full swing in 2014, 33 years after playwright Alison Lyssa wrote PINBALL.

She wrote the play to help a lesbian mother who was fighting a very costly court case for custody of her children.  Society has come a long way in its acceptance of same sex parents, but prejudice still exists today.  It’s good that Lyssa’s play has been revived for Mardi Gras Sydney 2014, to remind us of the pain that this kind of exclusion can bring loving parents.

Theenie brings her new friend, Axis, to the family home.  Her parents, Archibald and Violet, are likeable and affectionate with their daughter, but when Theenie’s narrow-minded and very  macho brother, Kurt, arrives with his pregnant wife, the sweet but ineffectual Miriam, (and children), he makes no secret of his distaste for his sister’s relationship.  He urges his father to fight for Sylvester and Louise to have custody of Alabaster.

The controlling Kurt is quite the sycophant when in the company of Louise, who is equally prejudiced.  Sylvester still has a soft spot for Theenie, but has no say in the matter.  Theenie must give up her son or give up her lesbian relationship.

Lyssa has created the voice of judgement in Solomon and says of him:“In creating the character of Solomon, who is the judge in the court that will decide the fate of the lesbian mothers, I used a number of the shockingly anti-women comments that I found in actual court transcripts – comments that were so salacious and outrageous, I could not have made them up.”

Theenie, played by Karoline O’Sullivan, who brings warmth and vulnerability to the role, is an interesting character as she never blames her family but steadily fights for control.  Axis, in contrast, is played with great wit and cynicism by Emma Louise.

The other actors play dual roles very successfully.  Louise and Violet are played with great contrast and humour by Ali Aitken.

Sylvester and Archibald are played by Leo Domingan and refreshingly different in character.  Faran Martin is wonderful as funny and naïve Miriam, also playing the feisty activist and lesbian friend, Vandelope, with contagious energy.

John Michael Burdon plays five characters, mostly the obnoxious brother, Kurt and the alcohol swilling, venomous Solomon.  He plays them all with courage and conviction.

Director Sarah Vickery has managed to bring out the humour in a play which is essentially very sad.  The energy levels and staging are clever and the 80s costumes, especially the men’s shorts are most entertaining and nostalgic.

PINBALL plays the Tap Gallery, Darlinghurst from the 11th to the 28th February.