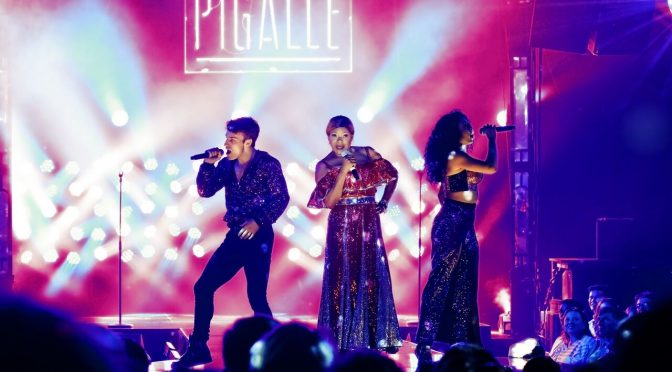 With garbage cans and fruit crates, mirror balls galore and a popping neon sign, PIGALLE, playing at the Spiegeltent for the Sydney Festival, is a magnificent seat boppin’ reminder of why disco lives.  Heartbeats pound in rhythm with the bliss of remembering and re-living.  It was always going to be a crowd pleaser with this talent line-up but what we are treated to is a memorable night of variety, excellence and smart direction that leaves you wanting more as you tumble out with ‘Disco Inferno’ firmly earwormed.

As the crowd excitably buzzes waiting for the show to start, there’s a terrific music mix to begin that physical electricity that beloved music pulses in the veins.  The cast appear as ‘Street Life’ struts and frets upon the catwalk stage and feet begin the unstoppable tap.  Costumed with a period flair that keeps on coming,  these artists thrill with sexy poses and sashayed peacockery.

When Marcia hits the stage the place goes nuts … the love in the room is why people are drawn to hear it live.  Throughout the show Marcia Hines will bring the soul, both upbeat and reflective, with a masterful, queen of disco, engagement with her adoring fans especially when she hits full disco with ‘You Should Be Dancin’’ Yeah! There are also two triple threat dancer/singer characters who drive the energy up a notch every time they appear.  (Chaska Halliday, Zackary Webster)

Inevitably and inescapably bringing the heat and ice is  multi-multi  iOTA who is about the only artist I can think of who can make a yellow sequined catsuit look sexy as hell.   Energetic and with marvellous presence, his work brings the show together.  Directed by Craig Ilott, PIGALLE has a recognizable shape that puts and audience in engagement mode and there’s a throbbing  ebb and flow as each act elides nicely into the next with variety galore, burlesque, aerial, wonderful dancing (Choreo: Lucas Newland). Also, the superb, evocative and storytelling dance from the ethereal physicality that is  Waangenga Blanco is so enjoyable to be drawn in by.  Then there’s … tits on fire from Kitty Kitty Bang Bang!

There’s an esoteria of erotica in the show, no more than ‘Supernature’ a bondage ballet with LED underlit rubbish bin hats and an agitated pose of iOTA’s thighs of steel as he squats with attitude in those huge platform shoes.  ‘Love to Love You Baby’ on the aerial ring, in red lights, twirling faster towards the climax of the song, a special highlight.  Along with a Kamasutra  above the stage cage tangle from Yammel Rodrigues and Hugo Desmarais to ‘Stomp’… it feels all right in the neighbourhood

70’s disco has that half remembered feeling but hit the empty stage with “toot, toot, beep, beep” and the unavoidable head bop of recognition ripples through the audience.  The music is chosen to foreground the skills of each artist but not all is recorded. Sonja Schebeck appears in many guises but having her play a real violin, not the new electronic version, is chillingly good. Nothing beats a well miked, fingered, resonant and real instrument.  The audio mix on the show I saw was stellar, not too loud and bringing the voices home sitting perfectly on top. (Musical Director: Joe Accara)

PIGALLE is a place to revel in the diva, to foot stamp and to cheer and soothe with the soul.  Funk me it’s fun!

PIGALLE continues as part of the Sydney Festival until January 27. 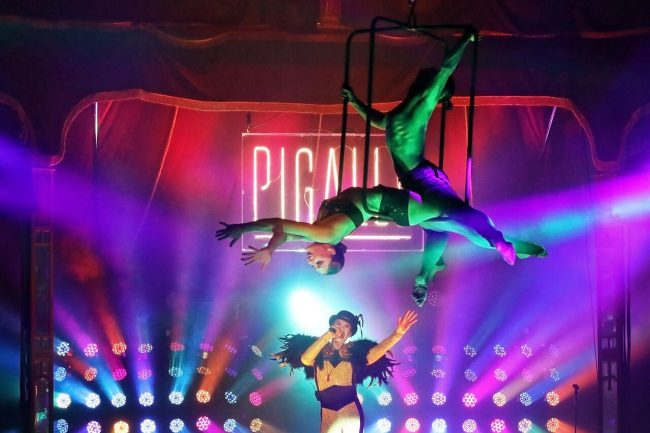