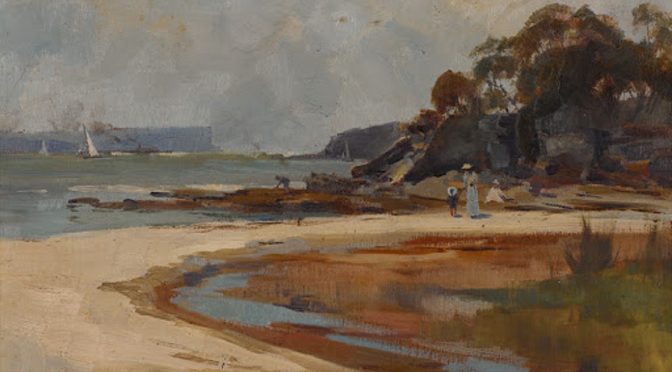 An intriguing, most interesting book about the life and times of A H ( ALBERT HENRY ) FULLWOOD, nowadays a somewhat forgotten artist. Yet his work and that of Streeton and Roberts in particular shaped how Australia was viewed both here and abroad.

While born in Birmingham, UK , Fullwood was regarded in his time as a major Australian Impressionist painter, and an example of the Heidelberg school.

Gary Werskey’s biography is extensively researched, generously illustrated and written in a captivating style, bringing Fulwood to life. The book is of small to medium size if a trifle thick, has a Prologue and Epilogue and is divided into fourteen chapters. At the back of the book there is a comprehensive index.

It has illustrations throughout both in black and white and colour.

It can be a little confusing at times as there is also his cousin John who was an artist and they did share some training in common. John, however, focused more on becoming a landscape artist.

We learn how Albert Henry’s father, Frederick, was a master jeweler in Birmingham. Albert Henry at first joins the family business while also studying at the Birmingham School of Landscape Art. Frederick passed away in 1883 and the family splinters. Eventually Albert Henry, his mother Emma and his two sisters arrive in Australia December 1883. At first Albert Henry works for John Sands, sets up his own studio and some of his engravings appear in the Town and Country Journal.

!884 was a big year for him, being elected to the Art Society of NSW and exhibiting with them, providing illustrations for The Bulletin but also because his work on one of his major projects began – The Picturesque Atlas of Australia , led to him being regarded as one of Australia’s major artists.

We follow his travels around Australia for the Atlas (under the subheadings ‘ Industrial ‘, ‘Coastal’  and ‘ Urban’ Picturesque) and learn about the difference between his painting and the engravings used for the Atlas (which were published in segments between 1886 and 1889).

We learn about the major influence of Julian Ashton in the Art Society and the expansion and development of the Sydney arts world. Albert Henry was seen as dashing and Bohemian. By 1892 he was considered one of Sydney’s leading artists. At this time no details about his private life were available. By 1892 more of his family joined him in Sydney.

There was an expansion of need for graphic artists/illustrators – Albert Henry worked for both the Illustrated London News and the Bulletin. Art historians, however, have tended  to concentrate on the painters such as Arthur Streeton and Tom Roberts, yet Albert Henry also continued his painting .

in 1890. Albert Henry was appointed the first resident Sydney artist for The Graphic whilst also submitting works for The Mail. Works include the major group portrait The Australian Federation Convention held in Sydney 1891 and Our Australian Colonies – George Street – the ‘ Regent Street ‘ of Sydney . His 1888 woodblock of the centenary celebrations is the largest ever woodblock for an Australian publication. (He also created a work for the Melbourne one).

In October 1890 there was the largest urban conflagration in Australian history which Albert Edward recorded – a huge fire in Sydney which created what is now known as Martin Place.He also did pictures of  pleasures, for example Mosman Bay, and bush life, plus working on the Christmas annuals for the Mail.

In 1882/3 Albert Edward was severely affected, like millions of others, by the financial crash, losing lots of money. Also his work was cut for the Mail and Illustrated Sydney News as they turned more to the use of photos. In 1884 he exhibited in the Chicago Art Fair winning four medals,  started teaching and also worked for The Bulletin and Black and White (a UK publication).

This is followed by his continued production of various etchings, his networking of various patrons (rich and including vice-regal ones) as well as expansion into Tasmania as a ‘second base’ which also provided him with new subjects.

Tom Roberts and Arthur Streeton arrived from Melbourne in 1891. They become great friends and we learn about the development of the ‘Heidelberg’ school in 1896. Then there were massive internal rifts in the Art Society of NSW leading to the formation of the NSW Society of Artists. Sadly, in July 1895, Albert Henry’s mother Emma passes away .

1896 was a big year for Albert Henry. He marries Clyda Blanche Newman and there is also discussion in the book about Albert Henry’s Australian Impressionism  and how this differed from the French version, with several interviews and articles published. In1897 their son Phillip was born.

In 1888/89 Clyda and Albert Henry have a working holiday in Tasmania. Also in 1888 there was a major exhibition of Australian artists in London and while illustrating Dad and Dave in 1889, Albert Henry decides to move his family (now including his second son Geoffrey) to New York .

It is a major culture shock for Clyda and Albert Henry finds it difficult to get work but is introduced to monotype printing which greatly influences his oeuvre. In 1901 Albert Henry was involved in depicting the Australian centenary celebrations and they move to London, where they stay for five years and Albert Henry works for various publications ( ie the English Illustrated Magazine and Sphere) and exhibited in the Royal Academy. But poor Clyda goes insane in 1903 after the birth and death of their daughter Marjorie at just six months old.

Albert Henry was in dire financial straits but was commissioned   to produce ‘Oilettes ‘postcard size paintings of Australian scenes which are enormously popular, and he continues his monotype work. We also learn how he becomes a member of the Chelsea Arts Club and is involved in the social life of the London/Australian art  world.

We then learn a lot about his war service – he worked at the Third London General Hospital, ending up in the pack store and is promoted to Sergeant.  At the time he also produced Christmas cards for the services, especially for 1915 after Gallipoli. He is then transferred to the Somme as aq war artist. Peace was declared but Albert Henry was in Belgium for Christmas 1918. Clyda passes away in June 1918 .

Albert Henry moves back to Sydney and we learn about the blend of the art world and social life, making contact with old friends and forming new ones. In 1924 he was elected Vice President of the Society of Australian Black and White Artists .

He has to have a couple of operations.  Was he an alcoholic who drank to excess?! Absolutely. He visits the New Zealand Alps in 1928. 1929 saw his last solo show and he also designed bookplates. He died of pneumonia October 1930 and Werskey looks at the obituaries and critical response at the time.

Why has he been so forgotten until now?!

There are a couple of exhibitions this year including Fullwood –  ‘A Nation Imagined : The Artists of the Picturesque Atlas’ at the National Library of Australia  https://www.nla.gov.au/exhibitions/a-nation-imagined which is on until July.

There is also a Macquarie University exhibition.