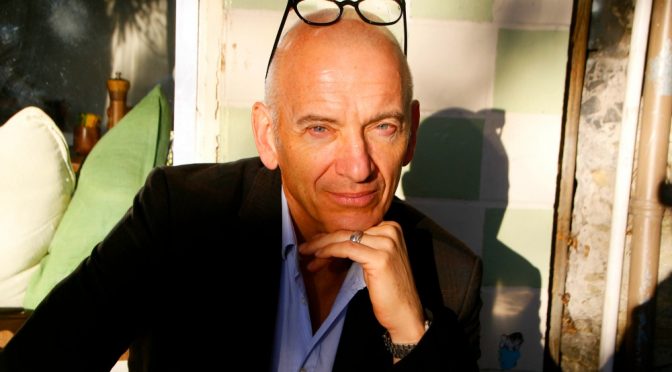 I spoke with Phil Grabsky over a coffee at the lovely Kawa cafe in Surry Hills. Grabsky is the producer of the excellent documentary series. Exhibition on Screen.

This year Exhibition on Screen is in its sixth season and features Degas- Passion for Perfection from 6th June, Young Picasso from the 1st of August, Rembrandt from the National Gallery London and Rijksmuseum, Amsterdam  from 26th September, and Van Gogh in Japan from 21st November. The Rembrandt film is coming back by popular demand, bearing in mind this year is the 350th anniversary of his death.

In previous years Grabsky has covered many of the great artists. Season  One featured Monet, Munch, Vermeer and Leonardo. Season Two featured Matisse, Rembrandt, Girl with a Pearl Earring and other treasures from the Mauritshuis, Vincent Van Gogh: A new way of Seeing and The Impressionists and the Man Who Made Them. Season Three featured Goya: Visions of Flesh and Blood, Renoir- Revered and Reviled, and Painting the Modern Garden; Monet to Matisse. Season Four- The Curious World of Hieronymus Bosch, I, Claude Monet, the Artist’s Garden- American Impressionism and Michelangelo: Love and Death. Season Five: Canaletto and the Art Of Venice, David Hockney at the Royal Academy of Arts and Cezanne- Portraits Of A Life.

This Degas film, which took some 18 months to complete, journeys from the superb exhibition at the Fitzwilliam Museum at Cambridge University, whose extensive collection of Degas’ works is the most representative in Britain, to the streets of Paris. With exclusive access to view rare and diverse works, the film tells the fascinating story of Degas’ pursuit for perfection through both experimentation with new techniques and lessons learnt from studying the past masters.

Degas perfectionistic approach  is recounted numerous times during the film as the artist had a habit of painstakingly drawing multiple copies of an artwork. He would continue this process until he was finally happy or at least reconciled with the work.

Grabsky  was drawn to Degas works because they are so striking and engaging. When queried about Degas unpleasantness and anti-semitism, which is not shied away from in the film, Grabsky replied that the artwork is there to be enjoyed and appreciated, and his personality is a separate issue.

Despite being the film’s own distributor, Grabsky’s films have been shown in 1,400 cinemas in some 63 countries, a great achievement.

When asked about how he goes about researching his films he says that he always searches first for the letters by and about the artist because they are both prolific and revealing. Ironically, correspondence will be more difficult to find now due to the impermanence of emails, texts, tweets which has meant that the current generation finds putting pen to paper very old fashioned and obsolete. It’s a sad fact that so few people write letters these days.

Grabsky prefers to show his films even if only for a short time on the big screen rather than releasing the film to television or other medium because the big screen is so much more immersive and pleasurable, He does, however, sell DVDs of his films so that people are able to watch the films from the comfort of their own homes.

When asked about the film’s demographics Grabsky said that the audiences are mainly over 50 with slightly more women than men seeing the film. Interestingly enough, the further east in Europe the films are shown, the younger the audience.

Although Grabsky produces and writes his films over a thirty five year period, the Degas film has been directed by his colleague ex Melbournian David Bickerstaff. Grabsky appreciates Bickerstaff’s  great attention to detail and depth and knowledge of the visual arts.

The music  is one of the great pleasures of the film. Grabsky advised that the soundscape to the movie has been composed by another colleague Asa Bennett who has come up with a great score. Another sign of the times Bennett created the movie’s soundscape from his own home studio.

The film is a potent mix of an artist’s quest and passion for perfection, his self imposed isolation and his growing frustration as he grew older and faced deteriorating eyesight and hearing.

Furthermore Grabsky realises most people’s knowledge of Degas is pretty superficial, bringing to mind ballerinas and horse races. There is so much more to Degas – his sculptures for one thing. Grabsky stated, “I want people to spend ninety minutes in the cinema and enjoy something special without all the usual distractions of modern day life with its short attention spans. I would like people to slow down a bit, to receive the immediate visual pleasure of a great artist like Degas.I would also like audience members to bring a friend or friends who are not usually interested in the visual arts to expose them to the majesty in the hope that they soon will become fans of the series.”

Grabsky mentioned that the responses/feedback to the films around the world have been positive and similar in nature which he is very pleased about, in that it shows the films have universal themes and appeal.

I asked Grabsky which has been his favourite film in the series thus far, and he said that it would have to be I, Claude Monet which also happens to be the film which has been most popular with audiences.  I asked if he had any idea of when the series would come to an end and he advised that he will continue to make the series and already next year’s program has been finalised.