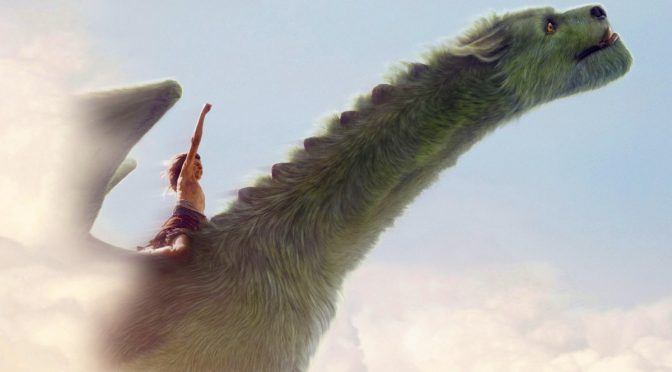 While her dad, Ron Howard, is stroking the nostalgia zone of baby boomers with his brilliant Beatles doco, Eight Days a Week: The Touring Years, daughter Bryce Dallas Howard is rekindling interest in a remake of a classic children’s film, PETE’S DRAGON. And whaddya know, it’s one of those remarkable remakes that is OK.

Bryce Dallas plays Grace, a forest ranger complete with Smoky Bear hat who finds young Pete, deep in the woods, a kid who was orphaned in a car wreck years before and brought up by a cute and cuddly dragon called Elliot, who looks like the love child of the flying critter from The Never Ending Story.

Grace’s dad, Meacham, has long held that the legend of the dragon lurking in the local woods is true, and has been wood working the seemingly mythical beast all his life. Of course, he is vindicated, but Elliot is vilified, and the hunt for the ferocious fire breathing flapper becomes hysterical by certain logging log-heads.

Director David Lowery was a surprise choice to helm this family oriented picture, his previous work being gritty adult fare like Aint Them Bodies Saints, but he has succeeded splendidly in bringing home the dragon without sauteing it in saccharine. So successful has he been that he’s now slated to direct a live action version of Peter Pan.

The casting is impeccable. Along with Howard, there’s Robert Redford as her dad, Wes Bentley as her beau, and Karl Urban as her beau’s brother, who is intent on capturing Elliot.

Pete is played by Oakes Fegley, a perfect little charmer and production values are high end with an exquisite score by Daniel Hart and wardrobe by Kiwi cossie queen, Amanda Neale, who dressed Redford for Truth, and costumed the wonderful What We Do In The Shadows.

PETE’S DRAGON – for Pete’s sake, go and see it.