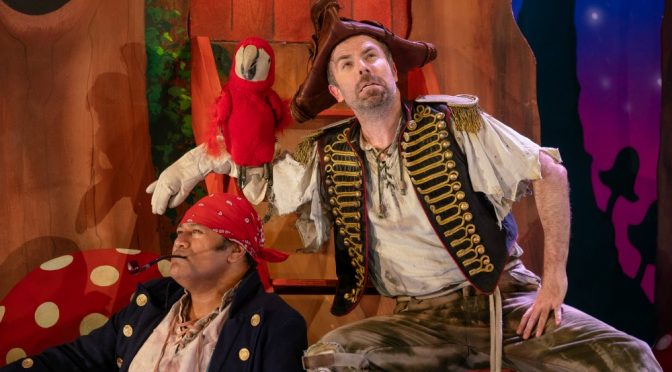 To begin at the beginning.

Anyone got a hammer?

PETER PAN GOES WRONG goes awfully wrong before it begins as clueless stage hands ask entering audience members for tools and their assistance in running extension cords through the auditorium.

It’s surprising no one asked for a left handed screwdriver, a pointless nail or a wood magnet.

This pre-show palaver is a precursor of things to come in this accursed production of J.M. Barrie’s perennial story of stunted pubescence, belief in fairies and fearsome pirates presented by the Cornley Polytechnic Drama Society Theatre, a company consisting of a cast and crew of unsurpassed incompetency, a nest of theatrical ninnies.

Before curtain up, the play’s director, Christopher Bean and the co director, Robert Grove, address the audience in a welcome that hints of the frisson simmering between the two. There is a lack of consensus whether what we are about to see is a play or a pantomime. “Yes it is.” “No it isn’t.” “Yes it is.” As soon as the curtain goes up, it is pure pandemonium, a play pen of faux pas, bungle and blunder.

There is wardrobe failure, prop misappropriation, set malfunction, one actor who can’t remember his lines and another who is literally petrified with stage fright.

The director’s interpretation of Neverland is taken far too literally, as Peter Pan flies about the stage seemingly never to land. And when he does touch down, it’s a crash.

Lighting cue askews, doors sticking, a revolve in revolt, and backstage intrigues seeping onto the stage manifest in a riot of ramshackle revelry.

PETER PAN GOES WRONG gets it right as an awfully big misadventure of choreographed chaos and orchestrated catastrophe, a slapstick that is side splitting, a wreck and a tangle that gets itself into a knot and leaves the audience in stitches.

PETER PAN GOES WRONG boasts a multi tasking cast that doubles and has the audience doubled up in unbridled laughter, with quick change and quip exchange, frantic antics, and pure silliness, the production builds up a momentum of madcap mayhem like a runaway train on a farce track to glee.

An exuberant ensemble of seriously funny thesps preen and pratfall through this frenetic fun filled show, by hook and by crook, and some seriously expert stage management,  insuring it will all be alright on the night. “OH NO IT WONT!”

If only every show could be this deliriously deranged.

And do pick up a programme, it’s not your usual glossy gush, but a true memento and a lot of fun in keeping with the show.