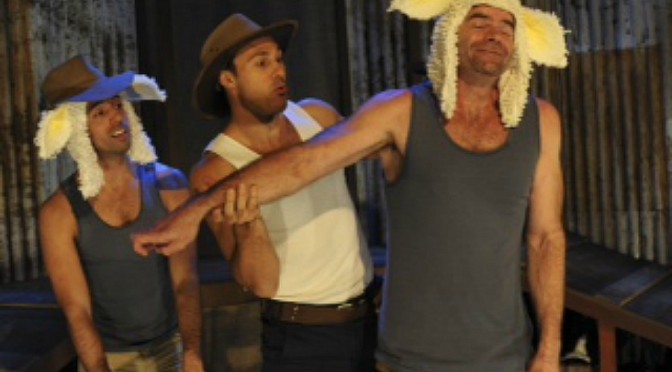 Petting zoos be blowed! Sydney kids will be more the ants’ pants after this encounter with sheep, dogs and shearers, courtesy of Monkey Baa (Baa, Baa..) This theatre event is high on production value, performance skill and chockers with creative success.

The rural Aussie tale of a shearer turned animal salon owner comes from the book by Jackie French and Bruce Whatley. It entertains in its slick new format as a new local musical jam-packed with current references. Much laughter and applause are fleeced from both the target age group and beyond.

The fun begins even outside the Lend Lease Darling Quarter Theatre. Kids and their families can stick their heads through the character boards for a quick smartphone portrait. Flocking into to the foyer, there is a create-a-sheep activity table. On the walls are posters on how wool is made as well as the history of the industry around the Darling Harbour area.

The show’s music, composed by Phillip Scott brings an enjoyable range of various styles and eras to the stage. Human and animal characters rock the Shaggy Gully shearing community with their harmonies and dance moves as they tell the story of new TAFE shearing graduate “Shaun” and Pete, his sheep-sheep substitute for the traditional sheep-dog. But that is not the only turn up for the books, from this book about turning up and being yourself. Traditional workers and animals all get a shakeup in the end.

Director Jonathan Biggins makes sure all this action is well paced. The cast of four get to work on quick changes to multiple characters. Not one iota of wit falls by the wayside, nor does any detail of animal mimicry or depiction of rural blokes. The switches of hats, animal headpieces, accents and personalities keep the children involved and the adults impressed.

Nat Jobe is a sheep through and through in posture and incredible range of tonal ‘baas’. His “sheep-sheep” creation from the book’s character is fine grade indeed. Fellow stars Jeff Teale, Todd Keys and Andrew James equally bound into any necessary human or animal guise and indeed coiffe. Their four-part harmonies are to be envied by any barber shop quartet, especially in the clipper-swinging opening number to this musical.

James Browne’s sets and costumes welcome us into the world of corrugated iron sheds, ramps, boots and blue singlets. The sheep and dog headpieces crown the acting skill of the ensemble. A simple but stunning set change for the play’s town scenes surprises us all, highlighting the compromise to tradition pictured in the original book.

This musical adaptation of a popular book is a great collaboration, producing a new true blue Aussie musical. Its Sydney school holiday season deserves to see landowners transport their lambs of all ages from the back paddocks to hear a good yarn spun out with energetic song and movement.

PETE THE SHEEP the musical will no doubt be of great export value when baled up and taken on tour. It promises to work just as well in a regional and metropolitan setting.

For more about Pete The Sheep, visit http://monkeybaa.com.au