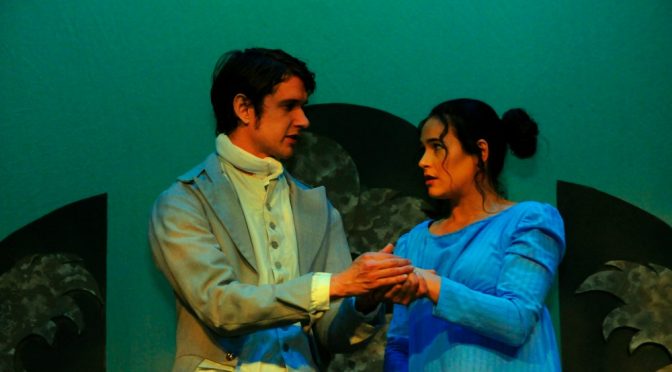 There’s a classic Joan Armatrading song called Love and Affection that memorably goes ‘I’m not in love but I am open to persuasion.’ In Jane Austen’s classic work Anne Elliott never needed any persuading, she knew that she in . love with  Frederick Wentworth. Some eight years prior she had broken her engagement to him because of pressure from her family that he was not of sufficient social standing.

Austen’s story starts in ‘present time’ with the two  finding that they find themselves ‘travelling’ in the same circles again. Things have changed. Most notably Frederick Wentworth has come back from the war as a Captain with the prestigious status of Captain  and improved social standing and means. Will the two revisit their past feelings now that circumstances have changed?!

All the performances are satisfying.

Rose Treloar is very appealing as the attractive, intelligent heroine Anne Elliott whose life has been ‘constricted’ by her conservative family’

Natasha McDonald  is a snobby, superior  Elizabeth Elliott, Sir  Walter’s oldest daughter, who doesn’t think much of Anne, wants to run the family’s affairs and encourages her fathers  wayward indulgences.

Charlotte Robertson  impressed as Louise Musgrove,  the high spirited second sister of Charles Musgrove who has come home after completing her school years.  She suffers a serious fall which shakes her up a lot. Louise ends up being engaged to Captain Benwick.

Vitas Varnas  has two roles playing Mr William Elliott and Mr Harville. As Captain Harville he plays  a slightly disabled man,. He walks with a limp, the result of a war injury.  He plays that convincingly. He was also convincing as the cold, calculating opportunist Mr William Elliott,

Elias Parker plays a courteous and intellectual Captain Benwick who has had a tragedy in his life when his wife to be died at sea. He is close to Anne, they share a love of reading and the Captain confides in Anne.

Jodie Sibley is credible as the kindly Lady Russell who  is overly protective of her goddaughter Anne and was instrumental in getting Anne to reject Frederick’s offer of a marital proposal.

Catherine Waters  had two roles as Mrs Clay and Mrs Croft.  Waters depicts suitable cunning as the poor widow Mrs Clay who has her heart set on marrying Sir Walter. As Mrs Croft she plays a woman who has married for love rather than money with her marriage to Admiral Croft.

A regular performer at the Genesian Theatre Company Rod Stewart is aptly good natured and plain speaking as Admiral Croft.

The show’s only negatives…There was a technical hiccup with a missed lighting cue and the actors finding themselves briefly in the dark.  The only other gripe. Sometimes the entrances onto the stage were a little slow and could have been a bit tighter.

One thought on “PERSUASION @ THE GENESIANS”