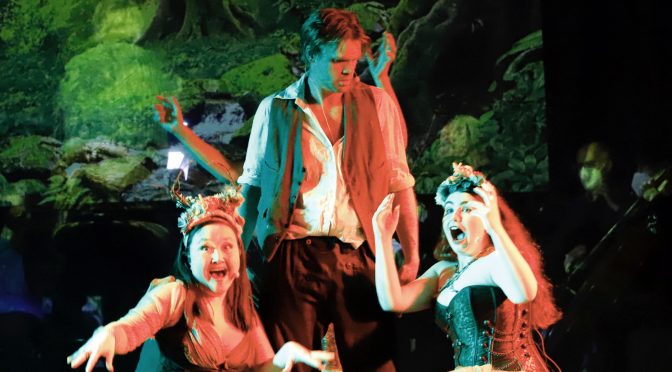 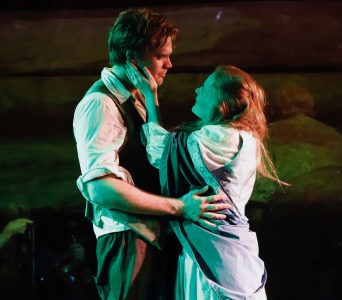 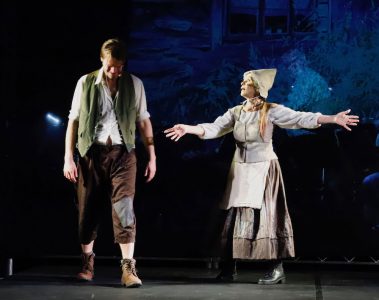 Sydneysiders are treated this week to an extraordinary rarity, the play Peer Gynt complete with actors, a 27 piece orchestra, full choir and chorus. This is arguably the first time it has been fully staged in Australia.

Many are familiar with the music of Peer Gynt composed by Edvard Grieg. The tunes have been used many times over in film and television including “Morning Mood”, “Anitra’s Dance” and “In the Hall of the Mountain King”. Also the sublime “Solvieg’s Song” for soprano can stop you in your tracks. These are popular as orchestral concert pieces loved all around the world. Grieg produced 2 musical suites from the 90 minutes of music but it’s rare to hear all the music at once and even more rare to see the play that the music was written to accompany.

That play was conceived by Henrik Ibsen, one of Norway’s best known and popular dramatists. Causing a stir, it was outstanding in its uniqueness and modern style when premiered in 1867. The 40 scenes are written in verse, flicking lightly between fact and fantasy, challenging the versatility of every performer on the stage who were given anything up to 7 different characters.

The story follows through the life of a mischievous brat, Peer Gynt. A young, good looking lad in Norway, he is a master of story telling using it to excuse himself from regular life and chores, charming all and sundry… at least for a wee while. The moral of What Goes Around Comes Around plays out over and over and he just doesn’t seem to get it.

In the opening act, Peer’s immoral behaviour lands him in hot water and he is forced to flee his village after seducing a bride at her wedding party. He escapes up into the woods but is followed by the innocent and love struck Solveig. Peer builds a cabin for them both but does not stay with her long, preferring to head off and seek his fortune while Solveig waits… and waits and waits.

The play became entrenched in Norwegian culture and has held a pride of place ever since. Such an epic tale is a mammoth project to stage so to see it here in Australia is an honour and privilege.

Endangered Productions is a theatre company focused on finding these rare jewels and staging them with a mix of professional and amateur players. Peer Gynt caught their fancy on discovering  a script from a 1944 Old Vic production. With the help of expert Translator and Dramaturg May-Brit Akerholt they were able to update the script whilst keeping English versions of the verse intact.

In the title role was Actor/Musician Philippe Klaus. A WAAPA graduate with some great film, TV and theatre credits to his name, he absorbed himself in the character mixing comedy with the dramatic. It’s a demanding role being on stage for most of the 3 hour performance. In fact, from memory, it’s possible he only got a break when Greig’s music took the focus. Klaus showed himself to be the ultimate professional, playing to the skill level of each performer he stood opposite. This is a major credit to add to his biography, one that is bound to lead to larger roles. Outstanding work.

The female leads featured Sydney Theatre Company seasoned professional Elaine Hudson as his mother Åse (pronounced Ohhh-sa) and Pacific Opera singer Emily Turner as his love Solveig (pronounced Sol-vigh or Sol-vay). The opening scene for Hudson was extremely difficult. The script clearly implies she is constantly hitting and pushing her son around nagging him about the chores she needs him so desperately to complete, the endless lies and the life he is wasting. In a modern world where physical abuse can get the hackles up, it’s a tricky scene to complete whilst keeping the audience on her side. After this scene, her character settled into a strong and natural identity with whom the audience could sympathise.

Turner’s Solveig was beautifully played. It’s a fairly simplistic character we don’t get to delve into very deeply. She is the epitome of a pure and dedicated love, the perfect example of the woman no man could pass by – except for one man, of course. Turner’s singing was the highlight of the play’s musical component. Pure, clear, well pitched and sensitive. Everyone fell in love with her.

The remaining cast and chorus threw everything they had into their numerous roles. From sensual dancers to frightening monster trolls to rolling balls of yarn. The wardrobe department must have worked overtime to cover these many many characters. Only a couple of wardrobe malfunctions were noticed which made the show all the more fun.

Behind the main back drop could be seen the orchestra under the baton of Musical Director Peter Alexander who did an excellent job. Concert Master Fiona Ziegler shone leading the orchestra through drama, lyricism and a droning solo to accompany the country wedding. At the back of the auditorium were members of the choir Coro Austral lead by Margot McLaughlin. Their musical contribution was subtle and cohesive placing the audience within the show.

Director Christine Logan gave clarity to the difficult storyline and making great use of just a few props. Set Designer Sandy Gray and Visual Images Source Andrew Mill did an excellent job providing animation and still images in the background so we knew the context of each of the many scenes. Sound missed a few cues which I’m sure will be ironed out by the second night. The venue management for some reason kept the air-conditioning down extremely low which left the audience wrapped in their winter coats, hats and scarfs. A suggestion at interval to perhaps add a little warmth was unfortunately ignored making the three hour performance less comfortable than it could have been. At the close of the show the wintery cold evening outside was warmer than the auditorium.

Chills aside though, the performance was full of energy and enthusiasm. After being well familiar with the music of Peer Gynt for so many years the writer has long wished to see the production complete with actors, singers, dancers, chorus, choir and orchestra.

We are so very lucky to have this production presented in Sydney. It’s recommended you put the effort into getting along to see the show before the close of the season on 3 July 2022. The venue is the theatre within the Paddington RSL Club,  Oxford Street, Paddington.

Eat first! There is a good bistro in the club. The show starts at 6.30pm and runs for approximately 3 hours including interval. The venue is very easy to reach. There is a bus stop right outside the club.