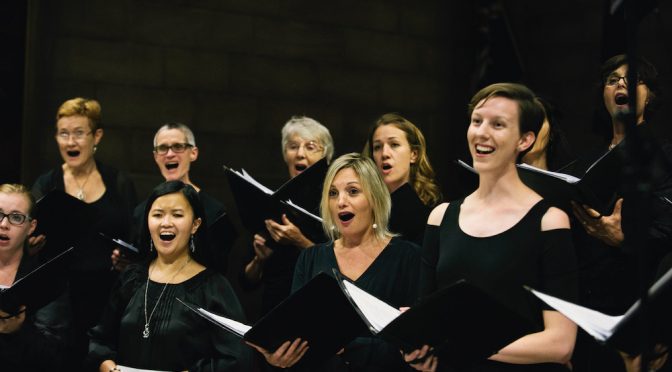 Tonight I broke the live concert COVID drought and saw my first live concert since lockdown came to Sydney. I could not have picked a more stimulating, harmonious and absorbing reintroduction to live music than The Sydney Chamber choir at the City Recital Hall.

One of Sydney’s finest vocal  ensembles,  tonight they performed a concert dedicated to remembrance and spirituality under the fine direction of Paul Stanhope. It was appropriate after the serious and fraught year we have had to have such an evening. It was a celebration of the glory of music and the whole evening was an uplifting experience.

The programming was intelligent and interesting. with a collection of moving and dignified pieces dedicated to memory.

The concert opened with ‘Minga Bagan, Mother Earth’, by Brenda Gifford, a Yuin woman and classically trained Saxophonist and teacher. The great acoustics in the recital hall beautifully amplified the gentle harmonies of this evocative plea to take care of mother earth. I could almost picture a magnificent Australian landscape so beautifully realised in the lilt of the voices. We were  reminded of how this prize winning choir acquired its reputation, with a combination of complete accuracy combined with a  musicality – a joy to listen to.

We were then treated to Thomas Luis de Victoria’s. ‘Lament’. Written in 1605 by a master of the art of Baroque choral music, this was an interesting contrast to the other offerings of the evening.

The mood of honouring and memory continued with Mary Finsterer’s, ‘When Soft Voices Die’.

My personal favourite of the night was James Macmillan’s ‘Miserere’. Sir James Loy Macmillan is Scotland’s most eminent classical composer and this piece, a setting of Psalm 51 to music, was full of life and vitality. The music, based on a Scottish ballad previously written by Macmillan was punctuated by dramatic duets. The piece, though based on repentance, was rich and complex, and completely absorbing.

Paul Stanhope drew from many sources of inspirations for the different movements of his Requiem which had its world premiere at this concert, including poetry by indigenous poet, Oodgeroo Noonuccal, Emiliy Dickinson, Neela Nath Das, Mary Elizabeth Fry as well as the traditional Latin Mass.

The featured soloists, particularly the sopranos Chloe Lankshear on stage, and Claire Burrell McDonald who featured off stage in the ‘Angus Dei’ were accomplished with a clear and deep understanding,. and love of the piece they were singing.

Along with the choir, ‘The Requiem’  was supported by Callum Hogan on oboe, Richard Shaw on the clarinet, Jess Meulenbroeks on the bassoon, Euan Harvey on the horn, Emily Granger on the harp, and Jesse Ciampa on percussion.

‘The Requiem’, though mournful, was also full of love and hope – and its finale, Emily Dickinson’s ‘Hope is the thing with Feathers’ was a beautiful and appropriate finish.

Paul Stanhope was a dynamic conductor and was rewarded with a well deserved standing ovation.

We left the concert hall, refreshed and uplifted by one of Sydney’s treasures, and ready for hopefully more treats from this group in the future!