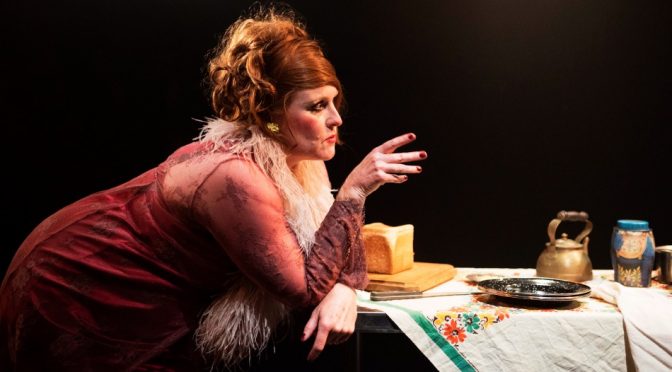 THE HAM FUNERAL was written by Patrick White, (the irascible and insightful Australian Nobel Laureate of 1973), in 1948. It is set in a gloomy, post-war London boarding house.

The play remained unstaged for 13 years. After being submitted for and controversially rejected by the1962 Adelaide Festival, it was instead first performed by the University of Adelaide Theatre Guild in 1961. It both shocked and delighted audiences.

It had been said that the play was ‘a triumph of the imagination over mediocrity’. This can certainly be said of director Kate Gaul’s latest production for Griffin Independent at The Stables Theatre presented by Gaul’s Siren Theatre Company.

The play’s dingy, dank boarding house is run by Mr and Mrs Lusty, essentially by the latter, Alma Lusty. They are an oddly vulgar and gluttonous couple who love to eat ham. She is chatty – he says very little. In contrast, we meet the protagonist – the upstairs lodger, known as ‘young man’.

He is a ‘poet’ on a path of self discovery, who isolates himself from the repellent reality downstairs. The other lodger, a young woman, is his confidante with whom he interacts on and off during the play. She is symbolic of his alter ego/other self and encourages him to socialise with the Alma and Will Lusty.

When Will Lusty dies suddenly, Alma decides to have a lavish funeral, mustering the young man into calling in her grotesque relatives. Some great vaudeville-like scenes, complete with ham, up the pace. Mrs Lusty sets her greedy eyes on the young man and begins her lustful pursuit.

Gaul’s direction is vibrant, funny, punchy and brutal, with some serious undercurrents of pathos and loss. Gaul has had to adapt White’s vision of a multi-level set to fit on the intimate triangle that is the Stables stage and has done so very successfully, partly through theatrical licence. She says that she is also challenged by White’s use of language; “the tone jumps from colloquial to heightened in a moment”.

White has always championed variation in style. His language is very witty and lyrical – as one character says, “a mad, muddy, mess of eels”. Gaul has assembled a masterful cast who bring dazzling energy to the production.

Sebastian Robinson exudes warmth and humour as the ‘young man’. He juggles the internal monologues with the audience, the crazy action in the Lusty basement, and the scenes with the young girl, with great ease.

Eliza Logan is fabulous as Alma Lusty and fills the theatre with contagious energy. Johnny Nasser is great as Will Lusty and later as one of the four crazy relatives. Jenny Wu is gracious and almost ghost like as the young female lodger.

The other three relatives played by Andy Dexterity, Jane Phegan and Carmen Lysiak bring a comedic and gothic punk quality to the stage, making the 70 year old play still contemporary.

Design by Jasmine Christie, Lighting by Hartley T A Kemp and Sound by Nate Edmondson all contribute to make this a memorable production.

THE HAM FUNERAL is thoughtful, funny and really enjoyable. It’s worth a trip to the Stables in Kings Cross to see it. It runs until June 10.