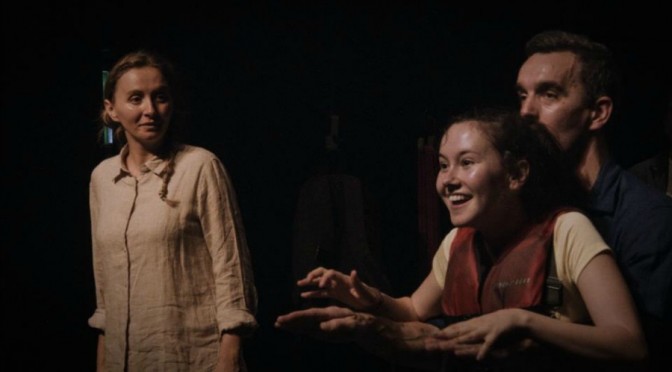 PATRICE BALBINA’S CHANCE ENCOUNTER WITH THE END OF THE WORLD is having a short run at the Australian Theatre for Young People (ATYP) before transferring to Vancouver, Canada for a full season. The show has an important pedigree as it is the final chapter of the two-year international partnership between three theatres from Europe, two from Canada and ATYP, supported through the European Union’s Cultural Fund. Thematically exploring migration and its effects, BOOMERANG: Documents of Poverty of Hope has facilitated 6 co-productions and this final production was developed with international cast and creatives to draw their experience together. ATPY’s WAR CRIMES (July 2015) was also part of the project.

But when it comes to experiencing theatre, that intimate yet communal experience, pedigree is irrelevant. It is about what we see, hear, feel and are moved by. And PATRICE BALBINA’S CHANCE ENCOUNTER WITH THE END OF THE WORLD is an intimate and moving work, gently fashioned yet dynamic and full of action.

Heartbreakingly on our TV each night, the migration experience is being documented before our eyes. As parents and grandparents though, we might think to keep the younger members of the family away from worst of the images, stories and emotions. This production, though a fictitious story but drawn from real life experiences, is designed for children 8+ and has both the standalone power to engage a young audience and the bedrock to help an adult who wishes to open a discussion.

We meet Patrice (Holly Fraser: Australia) who is in dispute with her mother about the usual things. Too much phone time, too long in the bathroom, hurry up hurry up hurry up. Patrice is inflicted with an embarrassing father who is happy to do fart jokes around her friends. The Balbinas are relatable family who might be next door. It is Patrice’s dad whose world changes first, then the family is on the move and Patrice is faced with changes and choices beyond her years. The voyage, refugee camp and re- settlement experience are all presented. As suitable for a younger audience the ending is life affirming and positive.

International artists Raul Atalaia (Portugal), Emilie Leclerc (Canada), Giuditta Mingucci (Italy) and Yves Simard (Canada) join Fraser to play all the characters in the show. From the sleazy people smuggler to the anti-refugee crowds shouting “out”. The performances are uniformly terrific and the stage is populated with a diverse range of characters with Patrice as a constant in the maelstrom of young and old people she encounters on her journey.

Created in the few weeks the company has had together, and around the cultural exchange programs on their agenda, the devising by both the cast and Odette Bereska (Germany), Giuditta Mingucci (Italy), Jackie Gosselin (Canada), has a strong imagery and movement basis. Yet the dialogue is accessible, there are several light-hearted moments and the use of a narrator gives a young audience context. This storytelling can explain Patrice’s interior world for them. Why does Patrice choose an inappropriate moment to repeat Dad’s fart joke back to him? The device nicely encourages empathy with the young girl protagonist.

As does the silent, almost mimetic sequences. Silent desperation is everywhere in this production. Lining up for food in the camp is repeated several times to put the hardship of depleting resources on display. Every action in the tightly directed show (Fraser Corfield: Australia) has detail and purpose. This includes the travel between the multiple settings and the journey elements. Movement is often rapid and as choreographed by Gosselin has a Pina Bausch power to increase tension and tap into visual images. The cast, squeezed together, sways in the frail boat, suddenly expanding into a fearsome storm during which a little girl in the front row required comforting by her mum.

Simple yet evocative, it is the Production Design (Ben Pugh UK) combined with the wonderful audio design (Pru Montin: Australia) and well-chosen soft orange and harsh steel lighting, which softly holds the storytelling in its hand. With only swinging hooks at the side of the space to hold limited props, there is a large acting area to bring the story to life. The space can be a town square during a demonstration or narrowed down to Patrice packing a backpack to leave forever.

PATRICE BALBINA’S CHANCE ENCOUNTER WITH THE END OF THE WORLD is Documentary Theatre which balances power and purpose to entertain and engage young audiences.