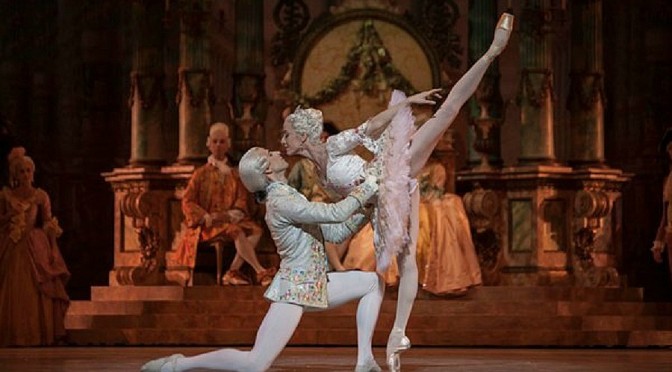 Bigger than Ben Hur, excessively opulent , sumptous and over rich , this version of ‘ La Belle Au Bois Dormant ‘ (Sleeping Beauty) first produced in 1989 for the Paris Opera Ballet by Nureyev is actually quite fascinating from a historical perspective – steeped in the history of the Imperial Russian Ballet of the 1890’s , one can just imagine it being seen by the Tsar and his entourage. ‘After’ Petipa indeed, full of dazzling demanding academic virtuosity.

It has a gigantic cast (only a company with the resources such as the Paris Opera Ballet could do this ) and features blindingly superb dancing with lavish ensembles and exquisite pas de deux .Overall it is a very ‘traditional’ version , extremely detailed and with clear mime at necessary points. Nureyev being Nureyev has expanded and developed Prince Desire’s role especially in Act 2 the hunting scene ( which is padded out considerably anyway ) .Here Prince Desire has a ‘ I am lonely , bored and melancholy ‘ solo similar to that for Prince Seigfried in ‘Swan Lake’.

From a ballet history point of view it is intriguing to see that the Lilac Fairy does not dance as such , but rather in her heavy floor length eighteenth century costume she is full of radiant elegant powerful mime .The battle with Carraboose is quite dramatic .Wicked fairy Caraboose was dramatically evil . Her strange , dark ,horned attendants were quite threatening .At critical points she usurps the throne and in this version causes the four foreign princes in Act 1 to go mad and kill each other.Both fairies had sensational makeup.

The ‘White Cat ‘ pas de deux is retained by Nureyev in Act3 ( the wedding divertisments) as is the Blue Bird pas de deux ( fantastically danced by and what exotic costume and makeup for him!) But ‘traditional’ other inclusions like Red Riding Hood and The Three Ivans weren’t . The Prince Florimund and his sisters pas de trois was also excellent . The ‘traditional’ fairy solos in Act 1 are also kept and performed delightfully and the four foreign princes in Act 1 for the Rose Adagio were excellent .This version has three women given knitting by Caraboose n Act1 and it is interesting to see how the knitting is echoed in the choreography until they are caught by Cattabalutte. Aurora pricks her finger however on a long thin needle hidden in flowers Caraboose in disguise has given her.

Our Princess Aurora was beautifully danced by Myriam Ould Braham .At her first appearance in Act 1 she is charming and graceful, perhaps a little shy. She was rock solid in the testing Rose Adagio with magnificent steely balance and control while positively glowing. In this version she graciously accepts the flowers and politely passes them to her mother the Queen .In the final act in the big Grand Pas de Deux we can see she has grown emotionally having met her Prince – she is radiant and serene.

Prince Desire was jaw droppingly danced by Mathias Heymann who was absolutely sensational with amazing soft beautiful cabrioles , as well as some glorious double tours and barrel turns in his solo in the last act .He has pure clean technique, a superb line and engaging stage presence as well as being a very thoughtful partner .
It will be most interesting to see the Royal Ballet’s version (screening here at Easter) and how different from the Matthew Bourne /New Adventures version!