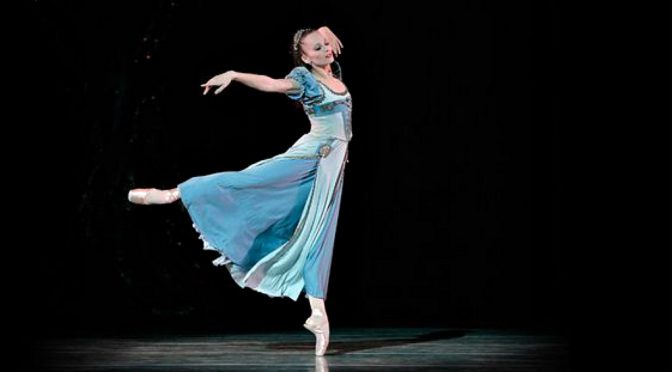 f we shadows have offended, Think but this, and all is mended, That you have but slumber’d here. While these visions did appear – A Midsummer Night’s Dream, Scene 7

Created in 1961 it features the marvellous music by Mendelssohn and uses a luscious reworking of the original Karinska costumes by fashion icon Christian Lacroix.

In Act 1 the story is told of Shakespeare’s play  – which we are informed Balanchine loved and could recite from memory in Russian-  and Act 2 features the wedding feast.

The Orchestre de l’Opéra National de Paris was in fine form and enthusiastically led by Simon Hewett .Music lovers will enjoy the many detailed close up views of the orchestra especially during the overture.

For the design of the work the company was aiming for a nineteenth century pantomime look. Some of the sets are stunning. The forest scene for Act 1 is brilliant. It is as if one can touch the leaves on the trees.

In Act 2 we are transported to a palace, Sleeping Beauty like, which the forest has partially reclaimed. It’s one of those mysterious places found in other Balanchine ballets that are both outside and yet interior – or instance in his work Jewels.

There are masses of sparkling crystals – courtesy of Swarovksi. For the mortals there is a medieval look to the costumes, for example in the ornate brocades. Some of the children and fairies /creatures are like insects with antennae wings and glittering, alien like makeup.

Choreographically you can see the links to Balanchine’s Russian heritage, taking us back to Petipa (especially Sleeping Beauty) but there are also links to his neo classical ballets. There are some very formal, intricate patterns for the big group dances ( for example, the wedding guest ensembles in Act 2 , the fairies in Act 1 ).Mime is also included.

Some of the lifts in the pas de deux are unusual and difficult. Balanchine’s choreography for the children (from the Paris Opera Ballet school) is not too demanding, but he required proper danse d’école, and receives it.

Even if you are very familiar with the story and assorted versions of A Midsummer Night’s Dream, this production can be a little confusing as it has a huge cast with no fewer than 14 soloist roles, some of whom have very brief appearances. And it was a little mysterious as to why Titania in Act 2 have an extended pas de deux with an otherwise unnamed Cavalier?!

Eleonora Abbagnato as Titania was enchanting – imperious, feline and commanding, she was delicious yet fiery. She was very pretty, floating in pink with her many attendant ladies.

Hugo Marchand as the rather autocratic Oberon was imposing in his gold outfit and showcased his incredible technique featuring numerous pirouettes, wonderful jetes and cabrioles and a number of beaten steps .Their pas de deux together were glorious – for example the reconciliation scene at the end of the first act.

Emmanuel Thibault, with Faune like horns is a wonderfully expressive performer, and  was an excellent choice as the mischievous, glittering Puck. The feature of his performance was his incredible technique, revealing his high elevation and his soft balon. Another highlight was his comic timing.

The quartet of tempestuous lovers – Helena ,Hermia ,Demetrius and Lysander –  in blue or red were excellently danced.

As Hyppolite, Alice Renavand was assured, charismatic and feisty. Her Theseus, Florian Magnenet, was a splendid dancer but I didn’t like his rather unappealing olive green faux tunic with armour costume. Both dancers had excellent technique.

After some delightful courtier dances in blue, the central duet to show off soloists was dazzling danced and then, the palace being blessed by Oberon and Titania, saw the feast begin after an enchanting firefly effect.

Running Time 2 & ½ hours including one interval

The Paris Opera Ballet’s production of Balanchine’s A Midsummer Night’s Dream screened at selected arthouse cinemas between  the 5th and 10th May.