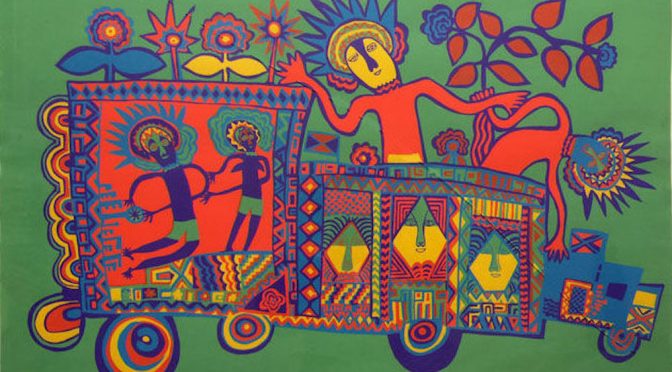 With lockdown and more online trading in art, the interest in PNG artefacts is increasing. And no wonder. The more complex, electronic  and unwild our world, the greater the appeal of the opposite world. We like the boldness of the sculptures, the wild designs on the spirit boards and the fierce expressions on the masks. We love that each artefact has significance to the creator, representing the heritage of millenia, identifying a specific tribe and place. As we get tamer we want more raw wildness.

There are basically five categories of PNG artefacts. First, contemporary PNG art, often painted in bright colours with modern paints, on newly made shields or on canvas. The best-known PNG artists are Mathias Kauage and his son Andrew Kauage, Timothy Akis and others you can find on the Internet. Michael Reid Gallery in Sydney exhibited contemporary Phantom Shields of the New Guinea Highlands  in June. 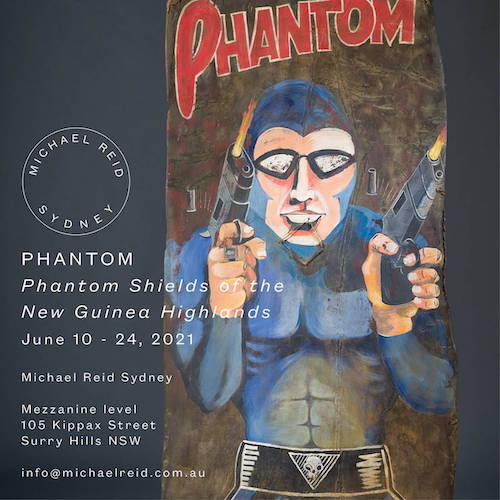 The Phantom Comics became hugely popular throughout PNG and the sign painters and artists be can appropriating the Phantom by putting him on shields. They’ve stirred quite a lot of interest among collectors and Museums. Almost every major world museum has an example of a Phantom Shield from PNG.

There is, as ever, airport art. There may be some well-crafted pieces but they have little connection to the village. It is commercial art, decried by purists, bought mostly by tourists. But if someone in PNG can earn some money making airport art, why not? As long as the buyer knows it is not traditional and the craftsperson gets a good chunk of the money, airport art is a legitimate trade.

The next category is traditionally made artefacts for the art market. They are made with traditional materials (no acrylic paint) in the traditional way (no electric drills) and can be used for a traditional purpose. These masks, drums, head dresses, spirit boards, storyboards and other items may have been made yesterday but they are crafted following the cultural guidelines. They may or may not have been actually used in a ceremony, but they are made in such a way that they could be. These are very affordable pieces and can be found online.

The fourth category is the very old and rare pieces acquired (sometimes stolen) from 1850 to 1930. These artefacts were most definitely used for ceremonies, initiations, protection from evils, as a bride price, and for other cultural reasons. Trader Warren Campbell explains that, “Rarity comes about by provenance, age and quality. The more illustrious the collector, the better the provenance and the higher the price.” These are the artefacts sold through the prestigious auction houses and by private collectors to public galleries, museums, university collections and wealthy private individuals.

Or they may not be, because there is the fifth category, the fakes and misrepresented pieces. It is a buyer-beware market.  Australian trader Richard Aldridge says one way of knowing if a mask is genuine or airport art is if it is pretty. The intent of the mask is to protect the village from a sorcerer or from the tribe on the other side of the mountain. Pretty just doesn’t scare off a demon or an enemy. Richard explains that most spirit boards were decorated to confuse outsiders.  These are two-dimensional carved figures coloured with pigments in swirls and angled face features. “If it’s not a confusing design, it might not be genuine.”

Many objects are made in Bali where acid is sprayed over them to make them look old. In PNG villages, old objects would be stacked together and stored in caves or shelters. They weather unevenly, not all around. Anything perfectly ‘old’ is likely to not be old.