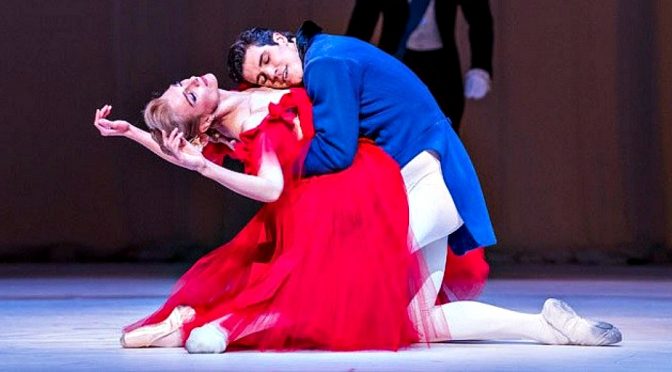 Opening the program was a delightful revival of The Dream. The forest clearing set was enchanting and beautifully lit, the Mendelssohn music gloriously played by the Orchestra of the Royal Opera House under the energetic baton of Emmanuel Plasson with the London Oratory Junior Choir giving a fine performance. The fairies were absolutely enchanting.

Mischievous, bouncy Puck was joyously danced by Valentino Zucchetti with amazing ballon, and Bennet Gartside was an outstanding Bottom.

Created in 1946, the year the Royal Opera House reopened, the very demanding Symphonic Variations  was given an eloquent, crystalline performance by the six dancers who are on stage the whole time.

This was a short but epic work demanding great precision and fluid dancing in unison, curled spools of movement with some explosive mini solos for the men, in particular.There were allusions to Balanchine’s Apollo yet with Ashton’s delicate touch.  Special mention must be made of Vadim Muntagirov who dances very impressively, almost like a cool minor deity.

The ballet was set in an abstract realm with Sophie Federovitch’s curving black lines on a greeny-yellow background and the black and white costumes. It did, however, seems that the hairpieces worn by the men seemed a bit odd.

Kevin O’Hare described Yanowsky as one of the great actress/ballerinas of her generation, following on in the footsteps of ballerinas such as Fonteyn and Seymour.

Yanowksy gave a powerhouse performance playing Marguerite in Marguerite and Armand , following in the footsteps of Fonteyn and Guillem, with emotions ranging from radiant joy to noble resignation. (This season also saw Osipova and Ferri perform the role).

The chemistry between Yanowksy as Marguerite and darkly brooding guest star Roberto Bolle as Armand was remarkable. Bolle was tremendous as fiery yet elegant Armand,

As Armand’s father Christopher Saunders was imperious and coldly demanding but eventually sympathetic to the lover’s plight.

The Royal Ballet’s presentation of the Ashton Triple Bill screens as part of the Palace Opera and Ballet season at selected cinemas between  7-12 July 2017.