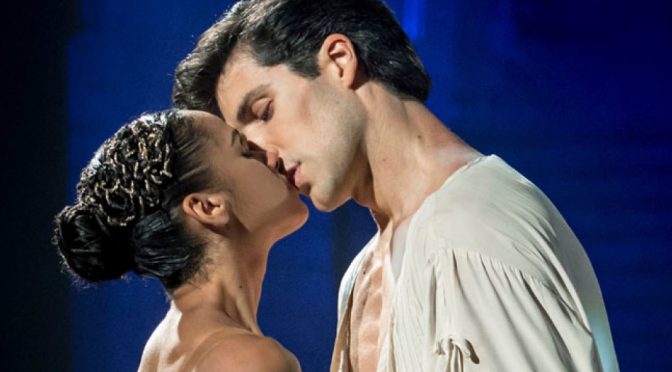 Lush and stylish, this production is a glorious feats of dance, yet again proving why this version is rightly regarded as a classic. Macmillan’s fiendishly difficult choreography is marvellously performed.

This screening,  in which we get to see Roberto Bolle and Misty Copeland dance together for the first time. is of the performance that took place at the  Teatro alla Scala in Milan on the 15th January this year.

The orchestra under the baton of maestro Patrick Fournillier played the lyrical, achingly passionate Prokofiev music thrillingly.  Music lovers should enjoy the many detailed closeups of the various sections of the orchestra.

Based on Shakespeare’s play, the narrative structure of the ballet is clear and concise, with a major pas de deux for Romeo and Juliet in each of the three acts.

The ensemble work for the corps de ballet is tightly controlled and yet thrilling.There are large blocks of group movement yet every character within the group, whether the dancer be a page, an aristocrat , a serving girl or a harlot, is well delineated .The dynamic, dangerous sword fighting scene is exciting and tightly choreographed.

The set designs, revamped by Mauro Carosi, and specially commissioned for La Scala, consist mostly of an open amphitheatre like shape with descending stairs and various panels that can be moved in and out, displaying  grilles and windows for the church scenes with all the candles, the different accoutrements for Juliet’s bedroom, and various banners and props for the market square.

Costumes are medieval in style. I have to say that I did not like the slashed, puffed elbow rings worn by the dancers which distractingly broke the line of the arm.

Dreamily handsome Roberto Bolle as Romeo was superb . Romeo is portrayed as a dreamy romantic struck by Cupid when he bumps into Juliet at the ball. Bolle showed off masterful technique with his dazzling turns, superb elevation and ballon.

He also proved himself to be a thoughtful and passionate partner. His solo in the second act when he receives the letter from Juliet was full of joyous explosions. The balcony and bedroom scenes were electric. He almost drowns in despair at the death of his friend Mercutio.

Misty Copeland as Juliet was magnificent in a glowing, inspired performance. She danced the athletic ,extremely demanding choreography was with fluid grace . Juliet is shown as perhaps slightly older than fourteen, but we see how she develops throughout the ballet from quite childish to a strong, young woman who dares all for love.

In this production it is mostly Juliet who drives the action.  Copeland is dizzy and ecstatic in the balcony scene, and then tempestuous in the bedroom scene. She drinks the potion given to her by Friar Lawrence as a desperate last resort , after we see a billowing ‘ Ulanova’ run .

Mick Zeni’s Tybalt is strongly masculine, elegant and arrogant. The sword fights were meticulously choreographed and we witness him deliberately stab Mercutio in the back.

Mercutio was amazingly danced by Antonio Sutera accompanied by Marco Agostino as Benvolio – two charming , boisterous and cheeky young lads around town. The scene with the trio, Mercutio, Benvolio and Romeo, going to the Capulet’s ball was full of mischief, and featured incredible, showy leaps and turns.

It was interesting to see Friar Laurence portrayed as a bearded Old Testament prophet with severely textured heavy woollen robes.

The bright and colourful gypsy harlots with their frizzy hair– Virna Toppi, Denise Gazzo and Beatrice Carbone – skitter boisterously across the stage, sometimes lifting their skirts and ‘flaunting their wares ‘ to entice the male customers.

This was a glorious, passionate and thrilling production, beautifully danced.

The screening, three and a half hours in length, includes two intervals  which feature interviews with Roberto Bolle and Misty Copeland.

The La Scala ballet performing MacMillan’s Romeo and Juliet is screening at selected arthouse cinemas as part of the 2017 Palace Opera and Ballet season.