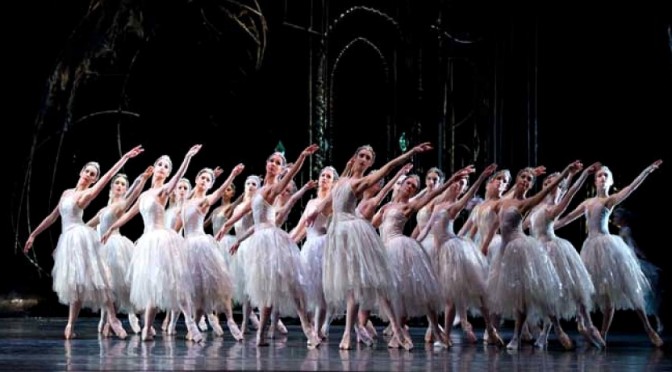 This particular version by Sir Anthony Dowell for the Royal Ballet is now almost thirty years old. I have previously seen it with other casts, both live in London at the Royal Opera House and on screen, and it is still enthralling.

SWAN LAKE is now regarded as one of the definitive classical romantic ballet, and this is a magnificent ‘traditional’ version, using the well known Ivanov/Petipa choreography. The story of doomed love and an evil sorcerer is elegantly portrayed.

There are fascinating close ups of maestro Boris Gruzin and the terrific Orchestra of the Royal Opera House who give a splendid performance.

Designer Yolanda Sonnanbend has set the production in Russia in the era of Tchaikovsky with plenty of gold and a wonderful mirror effect is used in Act3.  In Act 1 the colours are predominantly autumnal.

There is wonderful ensemble work from the corps de ballet throughout. The swans in unison are tremendous . The corps are also well drilled peasants and courtiers. The pas de trios in Act1 was vibrant and the national dances in Act 3 were exciting.

Natalia Osipova, originally from the Bolshoi and now a Royal Ballet principal, in the challenging dual role of Odette/Odile is sensational. Technically superb , she is ravishing.

As Odette, Osipova is noble ,yet complex and vulnerable. An enchanted, ethereal, mysterious moonlit creature with a luminous, long extended ‘line’. As laughing, villainous Odile, she is vibrantly, evilly enchanting , a glamorous femme fatale in black.

As Prince Siegfried, Matthew Golding, who looks a bit like Brad Pitt, has incredible elevation and a fabulous, clean technique.

Mostly, Golding is the stiff aristocrat, aloof and withdrawn, but we also the passionate side that he tries to hide. Golding’s solos in Act 3 in the ballroom are tremendous, and he is an attentive, thoughtful dance partner too.

The pas de deux are sensational. The ‘white’ Act 2 pas de deux with the sobbing violin is sculptured beauty, and the audience is mesmerised.

In Act 3 the ‘Black Swan’ pas de deux is dazzling and dynamic with Osipova effortlessly captivating Siegfried with the fizzing bravura 32 fouettes.

Gary Avis as the evil sorcerer Von Rothbart is a mysterious, almost hunch backed owl like creature in the ‘white’ acts 2 & 4 , with a powerful menacing presence.  In the ballroom scene in Act 3 he has a Mohawk punk hairdo and is a malicious, controlling presence.

In this version the national dances are shown as Von Rothbart’s creatures who areconjured up to distract the court.

I have heard that this is the last time the Royal Ballet will perform this particular version. Catch it if you can.

Part of the Palace Opera and Ballet season, the Royal ballet in Swan Lake runs at selected cinemas 8-13 May

For more about Palace Opera and Ballet :The Royal Ballet in Swan Lake.