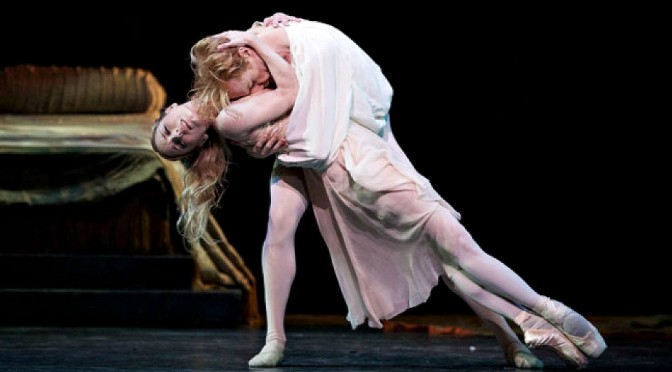 With its sumptuous sets,including a portcullis for the outside of the Capulet mansion, looming scary angels for the crypt scene and Byzantine like paintings for the church scenes,  very detailed and ornate costumes, wonderful lighting and the lush, lyrical, achingly passionate Prokofiev music, the Royal Opera House orchestra under the enthusiastic energetic baton of Koen Kessells were sensational, this is a splendid version. This ballet feels as fresh as if it was created yesterday, and MacMillan’s extraordinary, very detailed and at times extremely difficult choreography dazzles.

Based on Shakespeare’s play, the narrative is clear and concise, the ensemble work for the corps de ballet  tightly controlled and yet thrilling. There are large blocks of group movement yet every character within the  group, whether the dancer be the page, a serving girl, a harlot, is clearly defined .The dynamic, exciting sword fighting is boisterous and exciting.

Sarah Lamb as our Juliet is fabulous. A blonde beauty, she deceptively looks like a cross between a Botticelli angel and a fluffy kitten, with huge expressive eyes. Underneath her delicate, refined exterior there lives a young woman with a steely resolve. Lamb handles the solos and the difficult pas de deux superbly.

We see this Juliet  change from a young, naïve, shy girl to a determined woman. She appears the dutiful daughter and eventually succumbs to the family pressure to marry Count Paris but her heart secretly clings to her Romeo.

Soon, in one of this production’s highlights, she  sings the billowing Ulanova Run  to Friar Lawrence. Juliet drinks the potion given to her by Friar Lawrence as a desperate last resort.

Red haired Australian Steven McRae charms and enthralls as Romeo. McRae has the look, patrician and refined, and is gifted with an incredible technique. Through the performance he performs soaring, soft, high jetes, many of them, and is a very considerate, supportive partner in the pas de deux. His balcony and bedroom pas de deux scenes with Juliet are electric.

McRae portrays Romeo as a dreamy romantic, struck by cupid when he meets Juliet.

Mercutio and Benvolio, Romeo’s good hearted friends, were fabulously danced by Alexander Campbell and Tristan Dyer. The portrayals were clear. Here were two boisterous, charming cheeky young lads about town. They are shattered by Tybalt’s slaying of Mercutio.

The harlots with their frizzy hair–Helen Crawford, Olivia Cowley, Itziar Mendizabal, and Helen Crawford– boisterously skitter across the stage, sometimes lifting their legs and ‘flaunting their wares ‘ to entice the male customers.

The mandolin dancers in white-face, led by James Hay are terrific, and Lara Turk is a beautiful, elusive, aloof Rosaline, the young lady Romeo starts the play being infatuated with, and is seen wearing the height of the era’s fashions.

This was an exciting, captivating production that we are so fortunate to have the opportunity to see in the cinema.

Running time is three hours and thirty minutes. The film includes ‘behind the scenes’ short documentaries and interviews with conducted during the intervals, of which there are two.,

This Palace Opera and Ballet screening only has a short season that began on Thursday 29th October and concludes on Wednesday 4th November. Your final opportunities to catch this dazzling production are tomorrow- Wednesday- at the Palace Norton street cinema at 11am and the Palace Verona at 11.30am.