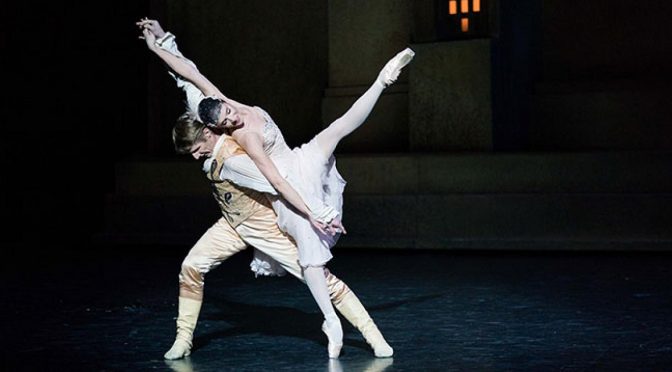 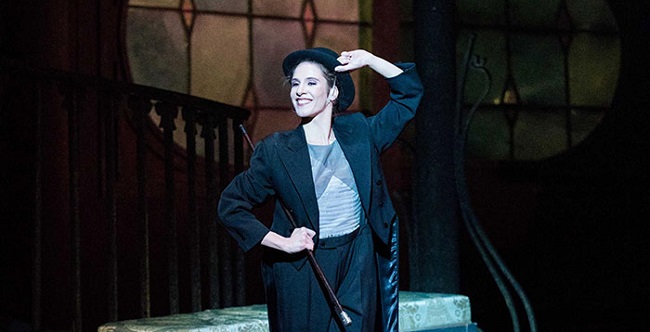 Hugely spectacular ,with amazing set designs and a giant cast, full of superb dancing ,this is a revival filmed New Years Eve 2018 of the Paris Opera Ballet in Nureyev’s version of CINDERELLA.It is a tribute to the company’s former Artistic Director who would have been celebrating his 80th birthday.

Nureyev’s version uses the lush, intense Prokofiev score – the Orchestre Pasdeloup is dynamically, thoughtfully conducted by Vello Pähn . During the overture there are great closeups of various Orchestra members .

The huge set designs by Petrika Isonsesco are amazing, full of tiny detail. At Cinderella’s home there are grand windows , on the film set a huge King Kong and allusions to Metropolis with the huge cogs of machinery. Plus the ‘ballroom’ scene has a huge staircase for CInderella’s entrance .

In his version Nureyev has transposed the story of Cinderella to the Hollywood of the1920’s or thereabouts with allusions to Charlie Chaplin, the Marx Brothers, the Keystone Cops etc.

In this version Cinderella is trapped, a servant in her own home, her father a henpecked drunkard, the place instead being dominated by her autocratic stepmother and bitchy, bullying sisters. She dreams of escape,  of becoming a film star and meeting her handsome prince as word is passed around of an audition for a film and the stepsisters are coached.

The ‘ fairy godmother’ ( well , godfather ) is transposed into a nomadic film producer searching for a new star, whose plane has crashed nearby and whisks Cinderella off to the ‘ball’ ( a film set) as a thank you for her kindness. The ‘prince ‘morphs in this version into the handsome leading Actor Superstar. The pumpkin that traditionally turns into a coach in this version transforms into a glamorous sportscar.

While at the film studio we see some of the various works being filmed. There is also a rather abstract section for the dance of the four seasons with spring, summer, autumn, winter each represented by one leading female dancer supported by two male and two female dancers.

Then the Hours (twelve men in grey wearing numbers) appear and are quite menacing and robotic .

Choreographically, Nureyev’s work is extremely demanding and reveals traces of his Kirov background. There are allusions to Ashton’s version of Cinderella as well as his Symphonic Variations and La Fille Mal Gardee and stylistically also Macmillan and possibly Martha Graham’s work .There are lots of very acrobatic, challenging lifts in the partnering, lots of fancy, fiddly footwork and, being Nureyev, many showy steps for the men of the company .

Valentine Colosante is splendid as our heroine Cinderella , sadly downtrodden when at home, glamorous and distinctively beautiful as eventually a major film star on site on at the studio . At one point she has a joyous bubbly solo showing off different dance styles which includes snappy tap dancing .But Cinderella realises fame isn’t everything and she has a crisis of self doubt and flees, dropping one of her glittery dance shoes. Will it all end happily?

Her horrid, rather monstrous stepmother and awful, bitchy bickering stepsisters are danced by Aurelien Houette ( in drag and en pointe) and Dorothee Gilbert and Ludmilla Pagliero with great comic timing.

Our leading man the prince ( here called ‘The Actor Superstar ‘ was superbly danced by dashing Karl Paquette – tall, blonde and in the Erik Bruhn/Peter Martins /David Halberg mode with sizzling yet creamy technique. His search for Cinderella takes him to Spain, (red and black Flamenco outfit for the leading female dancer, with naughty suggestive wiggles). China (the lead female in a sinuous display with angular arms wears a long green cheongsam with long splits at the side and note the long fingernails and bobbed black hair) and Russia. Interestingly when discovered at home Cinderella takes the lead and produces her matching shoe.

When we come to the final moments of the production and the spellbinding last grand pas-de-deux, we see that the camera crew are the filming the story of Cinderella.  The extended Grand Pas de Deux for Cinderella and the Star Actor is dreamily romantic ,magical and dazzling . At the end Cinderella signs another film contract ‘and they both live happily ever after’( hopefully).

The Paris Opera Ballet in Nureyev’s Cinderella as part of the Palace Opera and Ballet season screened at selected cinemas between the 21 and 26 June 2019 .