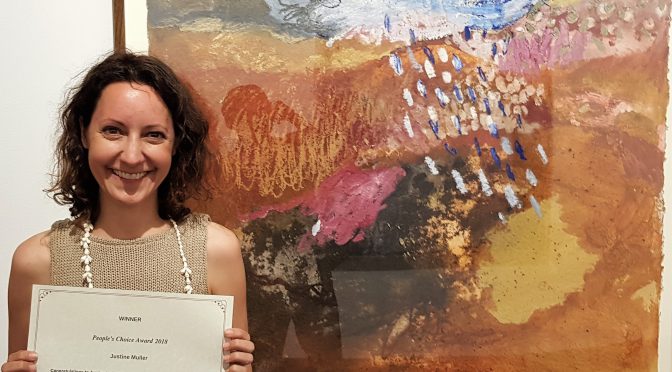 The $30,000 national acquisitive prize for a painting inspired by the Australian landscape was announced at Menzies Art Brands in Kensington last Monday night. Sponsored by Marlene Antico, and now in its 15th year, the exhibition of finalists and prize presentations took place on the night.

With over 1200 entries received, this year’s judges, Katrina Cashman, Ramesh Mario Nithiyendran and Tony Costa reflected on the cultural and professional significance of the entries in a contemporary art context.

Al Poulet claimed the overall$30,000 prize for his first new work since joining the community of artists in Wedderburn. Poulet’s special untitled entry (gully) resonated well with the judges who noted the density and complexity of his inspiring efforts and connection with the Australian bush.

Justine Muller received the Sofala Cottage residency for Dreaming of Rain Clouds. The judges noted the skilful use of material in her work that blends imagination and observation in a fresh and communicative way.

The inaugural Defiance Gallery Award picked out Michelle Hungerford for her work Wood for the Trees, and Andre Bowen for The Grove.

Both artists will exhibit with Defiance Gallery at Mary Place in 2019 and partake in a 3-week residency at Giverny, the Nock Art Foundation residency in Queenstown NZ, compliments of Michael Nock.

Finally, the People’s Choice Award, a $1000 gift certificate sponsored by Charvin Oils Paris was announced on Saturday 22nd September and went to Justine Muller for her painting, Dreaming of rain clouds.