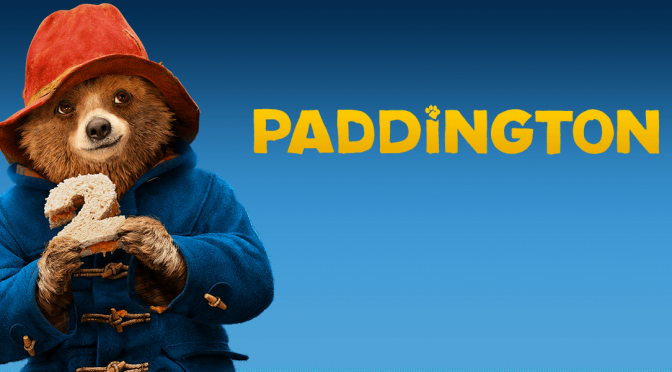 It’s been a big year for the bruin.

Earlier we had a scene stealing bear in the woods in Logan Lucky, then the bizarrely beautiful Brigsby Bear, and more recently the appearance of Pooh in Goodbye Christopher Robin.

Now we have a year capper with PADDINGTON 2, that rare beast, a sequel as good, if not better, that the original – a sequel among equals.

Pint sized Paddington may look like an Ursa minor, but his courage and kindness makes him an Ursa major, a selfless bear bearing bonhomies with bare faced good will.

Exquisitely voiced again by Ben Whishaw, Paddington is that splendid blend of nobility and naivety, a scrupulous Peruvian of impeccable courtesy with a benign gift for catastrophe. The road to hilarity is paved with good intentions and Paddington’s good intentions lead him to be incarcerated after being wrongfully found guilty of bear handed burglary.

Paddington’s imprisonment puts him in close proximity to a career crim, Knuckles McGinty played with utter glee by Brendan Gleeson. Knuckles is the prison’s cook and gives new meaning to the term Knuckle Sandwich, but he is soon charmed by the affable bear, and incorporates Paddington into his planned jail break.

Meanwhile, Paddington’s adoptive family, the Browns, are furiously trying to find the real culprit and clear their erstwhile ursine’s name.
In the first movie, Nicole Kidman was superb as the ice-cold Millicent Clyde, who wanted to catch, kill, and stuff Paddington and put him on permanent exhibition. The character was a wee bit scary for some younger audience members, so the new villain has been toned down with Hugh Grant playing vainglorious actor, Phoenix Buchanan, master of disguise, and purloiner of Paddington’s freedom by framing him with bare faced lies.

Appropriately for a bear bearing the name of a famous train station, PADDINGTON 2 features a thrilling train chase that’s full steam ahead in thrills and laughs.

VFX and CG Supervisors, Andy Kind and Glen Pratt and Animation Director, Pablo Grillo, along with the huge VFX team at Framestore, are again charged with the stunning challenge of making this “real”, a challenge met superbly in a glorious homage to early silent screen comedy.

Many of the creatives from the first film are back to ensure the further adventures of Paddington Bear live up to the quality achieved in the original film, and the care taken for this care bear shows in every frame.

Charming beyond belief, PADDINGTON 2 is a perfect holiday movie, a great big bear hug of a film. Grin and bear it? More like guffaw and bare it!