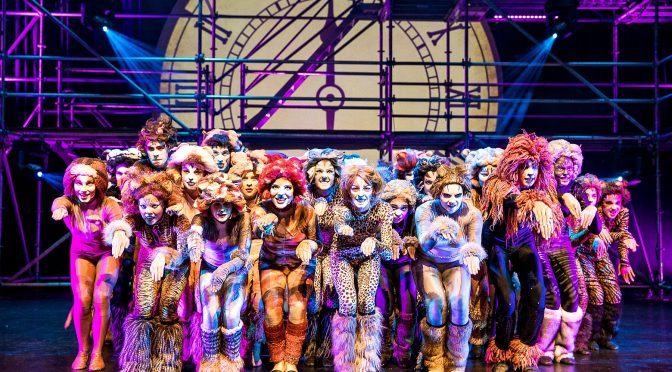 Meow. Aurilophiles rejoice! The Concourse at Chatswood at the moment is alive with cats – oozing rivers of them, exploring, crawling , stretching, entwining around your feet…

Yes, this is the much loved Andrew Lloyd Webber musical based on TS Elliot’s poems in a very impressive staging. The cast perform with power, passion and commitment. Cameron Boxall and Kira Nelson’s choreography is based on and generally sticks to the original; snazzy, tight,  and demanding.

The production featured a HUGE cast of cats (and kittens. We saw the red cast opening night).  At a couple of points – especially for the mega production numbers – the stage was overcrowded, with cast even overflowing onto the side of the stage.

The deceptively simple scaffolding set with its use of projections (a fabulous moon, trains for Skimbleshanks, a delightful major Asian harbour for Growltiger and Griddlebone) is not the standard dumpster site but is extremely effective.

The thrilling, atmospheric lighting by James Wallis was splendid.

The orchestra under the baton of maestros Peter Hayward and Alex Ash, hidden from the public eye, was in fine form.  There was no acknowledgement at the curtain call- a little disappointing.

Munkustrap, who In some ways acts as the show’s narrator, was excellently portrayed by the lean, lithe Noah Gill Mullins,

Simon Price (yes, the Red Wiggle) is in excellent form as enchanting Old Deuteronomy, leader of the Jellicle cats, and showcases a fabulous voice.

Josh Ridge as the charismatic, ultra sexy Rum Tum Tugger, has glorious fun prowling and hogging the stage and making all his teen cat followers swoon and scream.  (I was pleased that this version returned to the old ‘standard’ version of his song and not the rap version that was performed in the recent version of Cats at the Capitol.

The Cockney thieving team of Rumpleteazer and Mungojerrie was enchantingly portrayed by Laura Bunting and Jamie Smith in an acrobatic semi musical act.

Our Grizabella, in tattered purple satin, a red gash for a mouth and streaked eyes, was given a striking, poignant performance by Harmony Lovegrove. Her signature song Memory was sung  wistfully and brought the house down.

The Puccini tribute,  Growltiger’s Last Stand, was thrillingly performed,  and Growltiger, with his piratical eye patch, was wonderfully played by Cameron Barjaktarevic- Hayward.

The enchanting minx Griddlebonee was delightfully played by Kirralee Elliott (Is she as innocent and lovely as she seems, or is she in fact in league with Growltiger’s enemies?).

The battle of the Pekes and The Pollicles was much fun, as was Jennyanydots’ Beetle Tattoo as led by Lana Domeney.

Overall, a splendid, delightful version that captivates and enchants.

CATS is playing at the Concourse at Chatswood till the 28th January 2017.