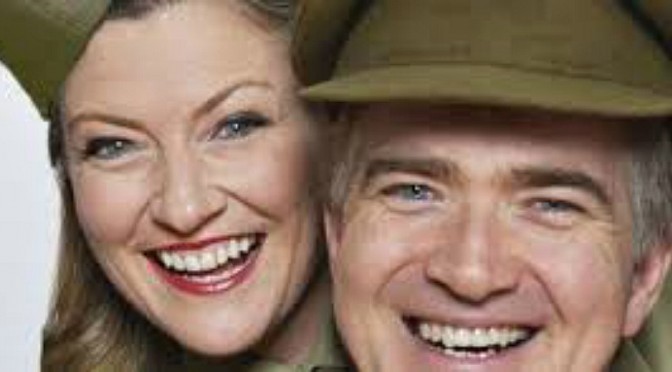 MUSIC IN THE MORNING is a Merrigong Theatre initiative that brings a range of musical acts and talented Australian artists, from the stage and screen, to Wollongong Town Hall. For many of these musicians, it is the first – and possibly last – time audiences will have a chance to see them perform before lunch. What’s more, is you don’t even have to be an early riser to make these Monday mornings concerts; each show begins at 11am, preceded by a complimentary morning tea at 10.

Celebrating NSW Senior’s Week, Over There: Great Songs of the War Years, drew a lively crowd of swooning seniors to the hall this Monday. Superbly sung by Roy Best, Jaz Flowers, Alison Jones and Cardine Vercoe, the cast had the whole audience tapping their toes to familiar tunes of the war years.

In the wake of ANZAC Day, the cast has produced an uplifting, positive and witty show to remember those who fought bravely for their homeland. The fully-narrated act featured musical tributes, sing-alongs and readings of hilariously cheeky letters from diggers to their loved ones. At one point, the musicians had the crowd in a full-blown singing battle to It’s a Long Way to Tipperary, a popular anthem amongst the soldiers of WW1.

The hour-and-a-half long production included tributes to a range of iconic musicians with a gorgeous rendition of Bob Dylan’s Blowing in the Wind and generous tributes to wartime songstresses, Dame Vera Lynn and The Angry Sisters. The crowd sang along to British classics, with songs like Keep the Home Fires Burning, Land of Hope and Glory and Goodnight Sweetheart. OVER THERE- GREAT SONGS OF THE WAR YEARS is a moving salute to World War I and II veterans, as well as a special tribute to those who fought in Vietnam War and other international conflicts. It was clearly a nostalgic show for many, if not most, of the audience.

Running from February to June, MUSIC IN THE MORNING is set to be filled with humour, entertainment and classic musical hits. Still to come in this month’s line-up are singer-actress Rachel Beck of the hit sitcom, Hey Dad..!, and the well-known Australian entertainer, Karen Knowles- who will be performing 30 Years of Musical Memories. The shows predominantly draw a senior crowd, but they certainly are a welcoming bunch. Plus, what demographic isn’t inclined to eat cake and listen to music on a late Monday morning?

All of the Merrigong’s MUSIC IN THE MORNING concerts start at 11am and include a scrumptious morning tea from 10am. Book a favourite act for $26 per person, or make it a regular outing and save some dollars, with a three or five show package for just $69 or $100. For the season’s line-up and booking details, visit Merrigong Theatre’s box office or their website: http://www.merrigong.com.au/shows/music-in-the-morning.html.