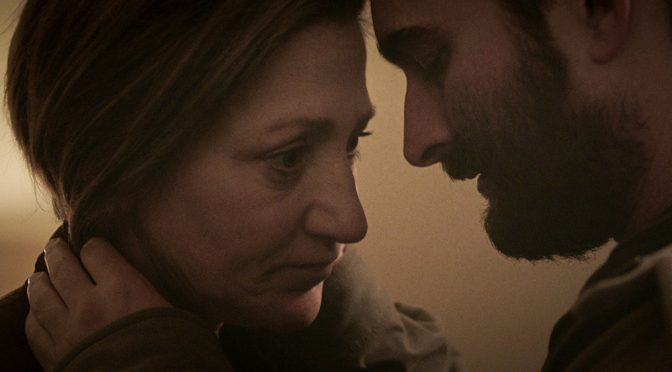 Like a gorgeous short story from Grace Paley or Raymond Carver, OUTSIDE IN is a slice of lifer that resonates with real situations, real feelings, and real people.

“We are all cracked vessels” says secondary school teacher of English, Carol Beasley, to her class, and no matter how hard we try those cracks allow the outside in, and stuff contained within to seep out.

Film opens with Chris riding in a car behind raindrop dappled windows. The feeling of freedom is palpable. Later we see him riding his old bike with a similar relish of freedom.

Chris has been in prison for twenty years, taking the rap for others, including his brother.  His high school teacher, Beasley, has been instrumental in getting him early parole.

The tension in OUTSIDE IN is built between the twin towers of his fragile freedom and equally fragile future, one he can only envisage with Beasley by his side.

The complication is that Beasley is a wife and mother, married to a man who is impotent, and mother to a daughter who is impudent, but she takes these roles seriously and genuinely works to make a go of it.

As played by Edie Falco, Beasley is heartbreakingly honest, expressing herself through gesture and display, the voice of loneliness and stoicism, utterly free of pretence and affectation.
Jay Duplass, who co-wrote the screenplay with Lynn Shelton, plays Chris with the arrested development that comes with a score of years incarcerated. In lots of ways he is still the teenager he was when imprisoned at 18. After jail, he wants nothing more than ordinary, but Beasley has had nothing but ordinary and now she wants something more.

OUTSIDE IN has characters that play from the inside out, people who have come to be called average, who are anything but average, who lead uneventful lives, full of seismic event.

Co writer and director Lynn Shelton scrapes away the accretions of cliché and the routine presenting characters who are real and representative of the magic in the marginal.

Production values are first class – the location of OUTSIDE IN is Granite Falls, Washington State, drearily dazzling in its drizzled damp, beautifully photographed by Nathan M Miller. And Andrew Bird’s compositions supply a super score.

OUTSIDE IN reminds us that American films are not all sterile emotionally stunted stunt centred studio pictures with super humans and CGI standing in for sincere sensations. It’s a gem.

AMERICAN ESSENTIALS FILM FESTIVAL screens at Palace Central May 8-20. check it out https://www.americanessentials.com.au/