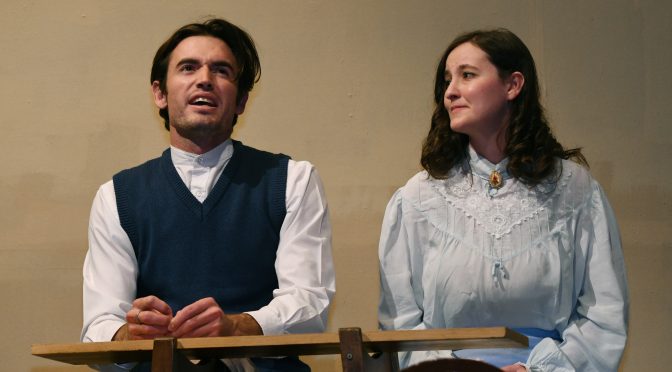 Thornton Wilder’s 1938 Pulitzer Prize winning play OUR TOWN focuses in on ordinary life in the small fictional American town of Grover’s Creek between the years of 1901 and 1913.

Watching the play one couldn’t help but feel a bit envious about this time in history. There was a much slower pace of life. Neighbours knew each other. They were part of a community. There was the local paper, the local Doctor. The milk was delivered door to door. Young people didn’t live together for years first. They just got married and had children. There were no mobile phones. No technological revolution. A simpler time in history.

And yet there is so much irony in the question which Emily asks of the Stage Manager near the end of the play: “Do human beings ever ever realise life while they live it?”.

Emily’s experience has been that people are so busy focusing on the struggles in their lives and worrying about the future, that they don’t appreciate the pleasure of living in the moment.

This was the message, the theme in Wilder’s play. Startling, in fact, because so much of contemporary thought pertains to this very issue of mindfulness, and appreciating the moment. Wilder proved to be a playwright very much ahead of his time!

With her production Director Lyn Lee stayed true to Wilder’s pared back vision for the play. There was minimal set design – just a ‘back fence/wall’ across the stage in a light, primary colour. The only props used during the performance were some tables and chairs and benches.

Lee chose to run the three Act play with just one interval which was placed at the end of Act 1.

Lee’s decision  to use a follow spotlight, at times, on the Stage Manager is questionable. It felt a little awkward and clunky,

She made good use of the theatre itself with actors calling out from the back of the theatre and racing down the aisles, especially in the wedding scene in Act 2.

With OUR TOWN everything pivots around the performance of the actor playing the Stage Manager who holds the audience by the hand through the entire play.

Haki Pepo Olu Crisden was very good in the role. Most of the cast gave reliable performances with just a few found a little wanting.

Lee’s production was a big enterprise she managed well. Clearly a lot of love had gone into this show. There was such a large  cast that at the end of the show there wasn’t enough room to squeeze everyone into one line at curtain call.

A wistful play with a sharp edge, OUR TOWN is playing the Rockdale Theatre Guild until the 5th June, 2021.