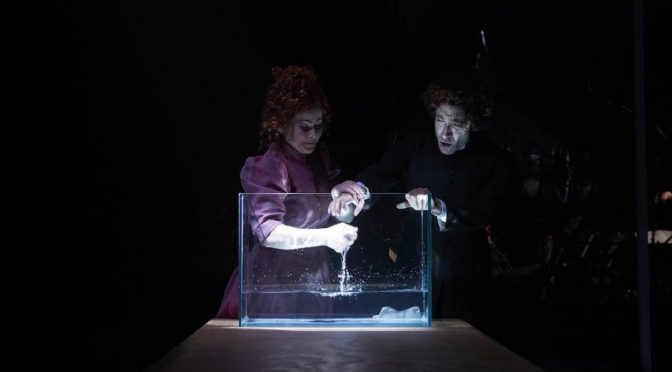 Gyger’s. intricate, challenging score as played by the dynamic orchestra conducted by Jack Symonds is complicated and while not quite atonal is quite definitely modernist – mostly sharp and spiky but with some quieter lyrical passages and some fractured, recurring motifs.

The opera has been directed by Patrick Nolan who deals with the more frantic moments with assurance and the split stage scenes are handled adroitly.

Flawed, awkward Oscar was given a sensational performance by Brenton Spiteri with a distinguished, limber lyric tenor voice . For Oscar what he perceives as divine will is an alibi or excuse for any sort of personal responsibility or actions and the consequences. At one point Oscar’s father tells him he is “itchy, angular and full of belief “.

Jessica Aszodi shone as headstrong, very proficient Lucinda, who has the colonial Victorian abilities and faults which are taboo in women but accepted in men, and she risks everything. She has a burnished sound and presents a complex, courageous character .
The confession scene in Act 2 on the ship on the way to Australia is captivating.

Regarding the cast other than the two leads – Jane Sheldon is magnificent as Miriam Chadwick, with a bell like tone of voice. Her arioso in act 2 is rather startling as we see her hidden passions, manipulation of Oscar and self centredness revealed – a woman forced to become cruel and hard because of constant misfortune.

Set design by Anna Tregoan is rather minimalist and abstract and includes a wonderful tree branch design, four long tables with various objects on them, and a clear small aquarium like box that is partially filled with water and stirred at points .

There are miniature embodiments of the glass cathedral and the Bellingen River as well as the glassworks and also large white wooden frames that represent various items and a white wooden cross shape. Damien Cooper’s lighting was refined .
An arresting , powerful production.

OSCAR AND LUCINDA runs at Carriageworks until Saturday 3 August 2019.