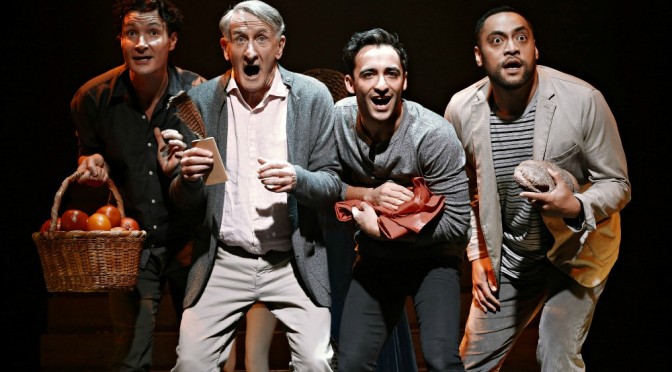 Some theatregoers, upon seeing that there is currently a stage production of Virginia Woolf’s great, fantastical, sprawling 1928 novel Orlando playing at the Sydney Opera House, may feel rather circumspect about going to see it. They would rather retain the world that Woolf’s novel created for them, rather than go and see a stage adaptation that may leave them feeling unsatisfied.

From my view, a visit to this Sydney Theatre Company production, currently playing the Drama Theatre, is well worth stepping out of one’s comfort zone for.

American playwright Sarah Ruhl’s adaptation is effective and faithful to the spirit of the novel as is  Sydney Theatre Company Resident Director Sarah Goodes’ vibrant and colourful production.

Coming straight off one of the Sydney Theatre Company’s flagship productions of the year THE PRESENT, Jackie McKenzie is wonderful in the lead role.There’s an impish, glowing, Puck  from Midsummer’s Night’s Dream kind of quality to her portrayal.

Hers is  a very substantial role; through the play Orlando willingly abandons herself to five centuries of change, from the Elizabethan age to the twentieth century, with an insatiable zest for the world and to find her place within it.

On her odyssey she undergoes numerous changes and transformations, most notably a gender change, and interacts with a host of characters, who each make an impression on her.

As do some very big, vibrant performances from the cast. True to the gender bending nature of the novel, veteran thespian John Gaden plays an imposing Queen Elizabeth 1.

Luisa Hastings-Edge is a sparkling Sasha, a gorgeous Russian lady whom Orlando unsuccessfully loses his heart over, Garth Holcombe delivers an outrageous and comical performance as the Archduke/Archduchess, and  Matthew Backer is great as Marmaduke.

The supporting cast also team  up to play a chorus that Ruhl has created, which comments/reflects on the action, at times, during the play.

I particularly enjoyed Goodes’ choice to make the performers use the full breadth of the stage,  and there was a lovely, warm, intimate use of the centre of the apron of the stage by the cast to engage deeper with the audience.

The main features of Renee Mulder’s set were an impressive revolve stage, a stand-alone staircase that has multiple purposes, plenty of uses of mirrors, and Orlando’s beloved oak tree which offered inspiration for his/hers poetic soul. Mulder’s costume designs are wonderful and always in keeping with the time period.

Alan John’s soundscape never intruded but always suitably underscored the action.  As well as using his own compositions John included extracts from the songs Just Like Heaven by The Cure, The Silver Swan by Orlando Gibbons, Beneath The Rose by Micah P Hinson and Ahi com’a un vago sol by Claudio Monteverdi.

There were some wonderful moments in Damien Cooper’s lighting design.

Tickets are from $58 with fees applying. If you are on a budget the best way to see this show is to purchase a SunCorp Twenties ticket. These tickets are only $20 and are released for sale every Tuesday at 9am for the following week’s performances.