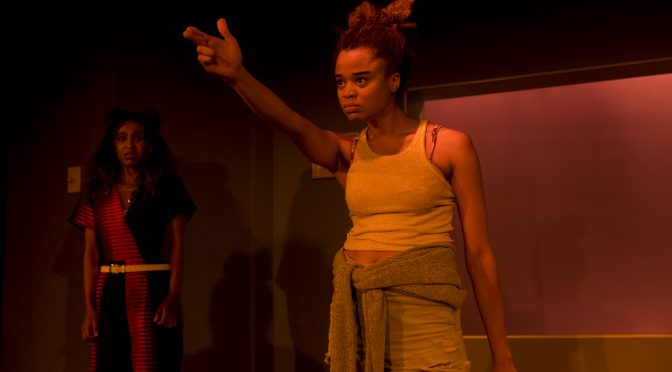 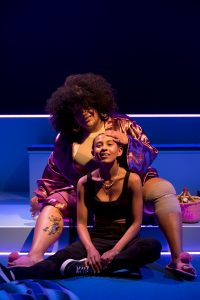 Pithy and zesty, Kirsty Marillier’s debut play, ORANGE THROWER is a compact calling card for an emerging writer ready to be noticed.

A four-hander with six characters, ORANGE THROWER is an examination of assimilation and aspiration, of migrant expectation and matters left behind that still have the power to haunt.

The play begins with a recording of Johnny Farnham’s breakout hit single, Sadie, The Cleaning Lady, the reason why made clear later in a condescending, casual racist remark.

Her parents are away visiting South Africa and Zadie is minding the house with her younger sister, Vimsy.

Someone is mysteriously throwing oranges at the house, a citrus onslaught that may or may not be perpetrated by neighbours Paul and Sharron, or Leroy, a local boy and swim champ with amorous feelings for Zadie.

Coinciding with the fruit hurling, the sisters are visited by their cousin, Stekkie, somewhat of a black sheep of the family back in South Africa, bringing some black magic into the narrative.

Zadie’s zest for assimilation seems zombifyingly zealous to her little sister, provoking Vimsy’s outburst: “I wish people would stop saying “you don’t understand”. I understand. More than you think. You hate yourself. You look down on who we are cos you feel something fucking foul towards yourself…Because you can’t stand being black.”

There’s no denying life’s lens is through the prism of privileged white people in an episode where nosy neighbour, Sharron, calls the cops and says “I’m calling cos there’s a man, causing a threat, a black man in paradise, currently causing a threat.”

Gabriela Van Wyk is awesomely sunny as Zadie, even when dealing with dark forces of family schism and casual racism in the Paradise community. She’s matched by Mariama Whitton as Vimsy with a likewise appealing zeal.

Angela Nica Sullen is a formidable presence as Stekki, and a wonderful cameo doubling as Paul, husband of Neighbourhood Watch bigot, Sharron.

Callan Colley is a firm fit in physique and performance as the Zadie smitten swimmer in hi viz Speedos, Leroy, and imparts enormous fun doubling as the white privileged, blonde neighbour, Sharron.

Directed with discipline and playfulness by Zindzi Okenyo, ORANGE THROWER is both joyful and joyous, celebratory, and salutary, played out on Jeremy Allen’s beautifully simple vivid blue set. 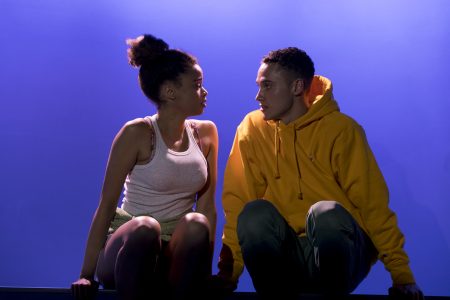 Winner of the Rodney Seaborn Playwrights Award, ORANGE THROWER is a co-production with Riverside’s National Theatre of Parramatta