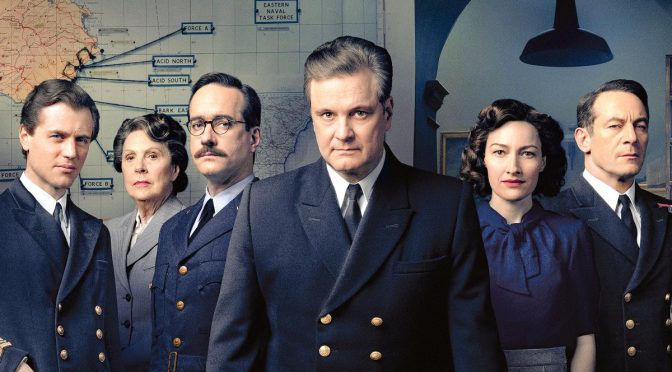 Ian Fleming beavering away at his typewriter sets just the right tone for the beginning of the World War II espionage picture, OPERATION MINCEMEAT.

Fleming was one of the masterminds behind this bit of subterfuge that bluffed and counter bluffed the Nazis into where the Allied invasion of Europe would actually take place, a plan that incorporated a corpse masquerading as a drowned courier carrying classified Most Secret documentation.

It was an elaborate and audacious plan worthy of any far fetched James Bond romp, but OPERATION MINCEMEAT is also a tale of character, a first rate story too remarkable for truth and yet the authenticity is without question, the scenes at the admiralty and elsewhere completely convincing.

Colin Firth plays Ewan Montague, an intelligence offer, who we first meet reading John Buchan’s The Thirty Nine Steps to his son as a bedtime story.

He and Charles Cholmondeley and Ian Fleming, working out of a dingy basement in central London as part of the top secret Twenty Committee of Naval Intelligence was presented with almost insurmountable challenges to create this colossal furphy, a counterfeit that would change the course of the war.

One fascinating aspect of OPERATION MINCEMEAT is the way that it utilises the idea of storytelling. Many of the characters working in the Twenty Committee are busily writing novels in their spare time. The Operation certainly rubbed off on Ian Fleming, who ended up basing many of the characters of his fiction on people he worked with on this and other clandestine operations.

Q branch, M, and Penelope Wilton’s splendid Moneypenny prototype are all depicted, so much so, that the film has the feel of vintage Bond.

The screenplay by Michelle Ashford is imaginative with a happy flow of humour and unaffected sentiment, handsomely directed by John Madden.

Madden, helmer of Shakespeare in Love, was pipped of the Oscar that year to Steven Spielberg for Saving Private Ryan, and here he gets to pip the Normandy invasion by storming  the beaches of Sicily.