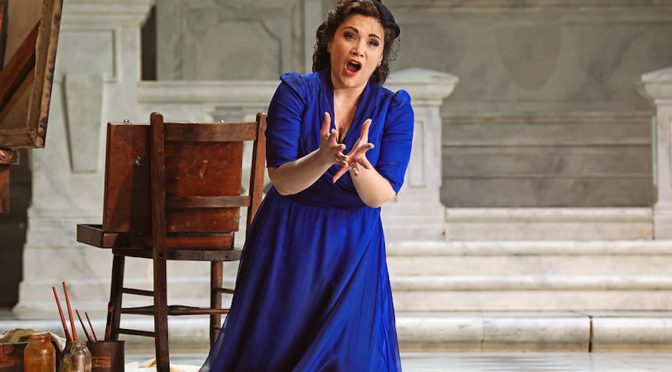 The Joan Sutherland Theatre was roaring with applause in the first opening opera night this year to be permitted full capacity audience after almost twelve months. The crowd was keen, the performers were keen and the mutual admiration left everyone in a high vibe mood.

Puccini’s TOSCA is a dramatically dark story originally based on a massively successful French play written for Sarah Bernhardt. She acted the role of La Tosca for many years, even touring the production around the world in 1889 including Australia.

The play was still hot and touring when Puccini was granted the rights to create the opera several years later. The story is set in a momentous time in history in Italy. A little background is useful here…

After the French Revolution Napoleon headed out to create his empire annexing every plot of land he could find. He had invaded and won Northern Italy in the War of the First Coalition, ruled for a few years but, on removing his troupes, discovered the Italians taking back their own country – shock horror – with the support of the Austrians.

Napoleon marched back into Northern Italy where the Battle of Marengo took place with the French against the Austrian forces. The Austrians were doing well by midday and their leader was confident of a win so sent his envoy back to Rome saying that they had it in the bag. What he didn’t expect was Napoleon making a comeback and winning the battle by the end of the day. The French were victorious leaving 14,000 Austrians dead on the battlefield and another envoy needed to take the much altered news back to Rome. The opera is set in this period of about 18 hours between the news from the two envoys. A dramatic change of power between nations reflected in the personal lives of the characters.

This production of TOSCA was created by renowned Stage Director John Bell (founder of the Bell Shakespeare Company) for Opera Australia in 2018. Set in Fascist Italy 1943 it matches a crucial moment in Italy’s history when the Fascist regime was finally overcome and Mussolini arrested.  The sets for each Act starkly contrast with each other.

Costume designer Teresa Negroponte and the Lighting designer (not credited in the program nor website) have both done an excellent job enhancing the visuals. Tosca’s concert dress in Act 2 slips and slides showing her vulnerability. It’s understandable Tosca whips home to change into something more comfortable before saying farewell to her lover an hour later in the prison. The added physical demands to complete the story would have been difficult otherwise so we’ll forgive her.

All soloist singers seemed relaxed and very comfortable in their roles. Soprano Carmen Giannattasio has graced stages from Russia, across Europe and the Royal Opera House with at least two seasons of Tosca under her belt already. With a fabulous, powerful voice, she played her Tosca slightly bumbling, pigeon toed and cuddly with a pouting jealousy. This is quite different from others who prefer the “diva” approach to their opera singing character. (Yes, the character’s vocation is as an opera singer.) The cuddly approach matched beautifully with the movements of local tenor Diego Torre playing Mario Cavaradossi where lovers’ hugs were often holding each other’s elbows or cheek to cheek with arms around the neck. They made a sweet couple.

Torres’ voice was confident and clear throughout most of the show but faltered on several high notes. Hopefully that will resolve by the next performance. He played the role very easily and naturally with good diversity in emotions from the playful to the fierce revolutionary.

The role of Scarpia is one of the great “baddies” of opera and suited the fascist uniform with direction showing no one was at ease around him. You would keep your back against the wall whenever he was in the room. Italian born baritone Marco Vratogna captured the role perfectly with a threatening feel to every move right down to the cocked eyebrow. At times the orchestra overtook his volume though I would look to the conductor to correct that. Vratogna has previously played the role with the Berlin Philharmonic.

Minor roles were all excellent. Luke Gabbedy as the runny nosed Sacristan was the perfect side kick to Cavaradossi for Act One. Graeme Macfarlane revelled in his gloating fascist Spoletta and Alexander Hargreaves left room to fill out his boots a little more, decidedly subtle in his performance. Anthony Mackey was suitably nonplussed as the gaoler and boy soprano Aidan Carey offered a strong clear solo to begin the final act. We so rarely get to hear young voices in these operas so his performance was refreshing and very welcome.

The Opera Australia Chorus had little to sing in Tosca so made the most of their stirring ‘Te Deum “Tre sbirri…una carrozza’ to close Act One. The audience went wild with appreciation for them. The actors fitted in seamlessly though some extra work on when to relax and when to stand uniformly might be useful. The Opera Australia Orchestra were excellent as usual. Young Italian born conductor Andrea Battistoni kept a fairly regular tempi though missed following the soloists a few times, even having Giannattasio bend her solo to match his conducting at one point.

This is nit-picking of course. The production was a great success over all and the audience were very generous in their appreciation. TOSCA is filled with music you’ll love and recognise including Tosca’s “Vissi d’Arte” and Cavaradossi’s “E lucevan le stelle”. Both are concert favourites of the world’s greatest singers. Look them up on Youtube if you need a reminder of what they sound like.

You’ll witness drama, loyalty, betrayal, comedy, torture, desperation and everything in between. A superb opera that is a must see this season.