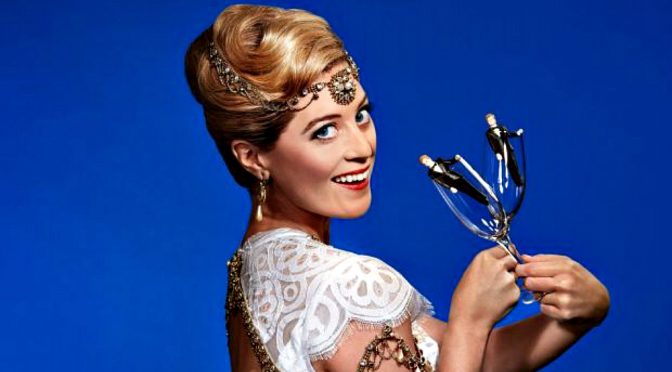 This joyous, frothy operetta is a sheer delight. Robert Andrew Greene’s TWO WEDDINGS ONE BRIDE is adapted from Charles Lecocq’s 1874 classic operetta Girofle-Girofla. Musically it blends some of the most famous and beautiful songs of the operetta repertoire (Strauss, Offenbach, Lehar, Kalman, Lecocq, Stolz ) yet at times it sounds like Mozart, Verdi or even Gilbert and Sullivan.

There is a lush Oriental minimal set design by Owen Phillips – looking as if it could be for The Abduction From The Seraglio or some such – and stunning costumes by Tim Chappel. Andrew Hallsworth’s choreography is inventive and the small cast of five perform with great comic timing.

Polished musical accompaniment was provided by pianist Robert Andrew Green and violinist Yuhki Mayne.The songs were was sung in English; the lyrics were a bit risqué and there were a couple of witty Australian references .

We are at the residence of the French Governor Phillipe  and his wife Aurore in Tangiers ,Morocco 1941 where preparations are underway for the forthcoming double wedding of identical twins Girofle and Girofla. When pirates kidnap Girofla, Girofle’s parents concoct a plan to keep both bridegrooms happy and save the family’s and Morocco’s finances and future. Will Girofla be rescued? Will Philippe loose the dowry money and his head? Or will all be resolved happily?

John Bolton Wood and Geraldine Turner are splendid as the two parents. Their love-hate relationship (Aurore is seriously considering demanding a divorce) is portrayed with fabulous comic timing.

Turner, playing the money chasing matriarch, is glamorous in a long evening gown, is in stunning voice whilst Wood in imposing heavily brocaded uniform was terrific with his comic maladroitness and self- important pompousness.

Julie Lea Goodwin as the twins was vivacious and magnificent. Her voice was supple and controlled.The differences between the more feisty, assertive and sophisticated Girofla and the somewhat shyer, more submissive Girofle were wittily delineated. Her quick costume changes were impressive and the wedding dress was a stunning multi layered ruffled confection.

Blonde, handsome Nicholas Jones was splendid as the dashing romantic lead Marasquin, the son of Governor Philippe’s bankers and the groom to be of Girofle.

Romantic and somewhat shy he was splendid in his rendituion of Lehar’s Dein is mein ganzes Herz. Another highlight was the scene with Julia Lea Goodwin as Giroffe when she reacts in a very comic, over the top way to his serenading her.

Baritone Andrew Jones impressed as the impatient, over the top lusty Generale Mogdiliani. Jones  played his character as egotistical, ‘oily’ and a little mad. The Generale’s increasing frustration at the absence of Girofla is well depicted.

Wonderful tenor and master of disguise David Lewis with honeyed tones, terrific diction and singing combined with smooth grace impressed playing four different characters: ‘Pedro’, ‘a Spanish cook’, ‘a wedding celebrant’ and ‘an Australian Colonel’. A highlight was his rendition of Offenbach’s Gendarmes duet which became a quartet.

This was an enchanting fast paced operatic comedy that saw the satiated audience clapping along to the can can finale .

The current season of Opera Australia’s production of Robert Andrew Greene TWO WEDDINGS ONE BRIDE, directed by  Dean Bryant, is playing the Playhouse at the Sydney Opera House until  21st May, followed by further seasons between 7th and the 25th June, and the final season between the 12th and  22nd October 2017.