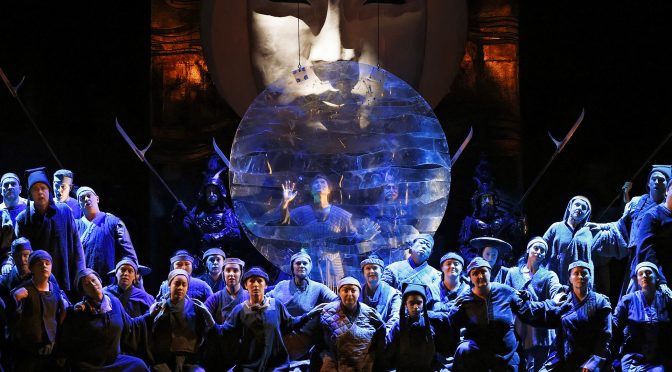 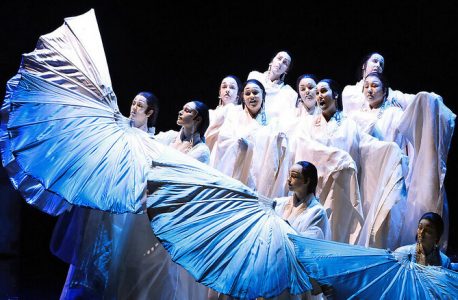 Many solid elements in this production ensure a fantastic night at the theatre is to be had. Any 2022 crowd, hungry for a dazzling live event will not be disappointed with this version of Turandot. Only the fantasy, finesse and joyously exaggerated visuals of opera could provide the mix of drama, divas, design success and music dripping in atmosphere to be enjoyed here.

Puccini’s tale of revenge, loyalty and love conquering cruelty is in safe hands here, almost two centuries after its as creatives and stellar cast bring this revival version back to the stage. Revival Director and former dancer Shane Placentino preserves the dynamic pacing and  momentum of Graham Murphy’s original direction and choreography.

The movement of the adult and children’s chorus in particular show the enduring success of Murphy’s genius in harnessing the courtly masses on the compact but beautifully lit Dame Joan Sutherland Theatre stage.  The chorus-heavy opening to this opera, with the court in the violent vice-like grip of vengeful Princess Turnadot is enhanced by the slick blocking and execution of the group emotion. The fine control of nicely nuanced chorus utterance was made complete with super-effective group movement. 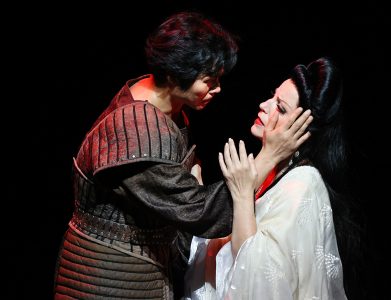 Above : Yonghoon Lee and Lisse Lindstrom were strong adversaries in this production. Photo credit: Prudence Upton.

The set and costume design by Kristian Fredrikson continues to be a stunning starting point for this production. There is a paletteof  dark earthy tones in worn robes and strong tunic when the trio of King Timur, slave girl Liu and Prince Calaf unite. The visitors to court are played by Yonghoon Lee, David Parkin and Karah Son. They meet and travel in a blaze of humility across the extremes of the royal court, with outlandish royal costumes and sets to match.

Keen atmospheres with Asian flavour in Puccini’s score are nicely rolled into each other by conductor Renato Palumbo. Puccini’s shape-shifting through-composed soundtrack in Palumbo’s interperetation exquisitely supports stories from all characters in this troubled palace where suitors die if they cant guess impossible riddles.

The onstage chemistry between the characters of Liu, Timur and Calaf is definitely no ambiguous riddle. The stability in Yonghoon Lee’s powerhouse tenor is equally penetrating in the tender early scenes with the slave girl and his long lost father. Embracing  multifaceted choices for the various lyric moments, Lee sings with warmth of tone and expansive phrasing. This is heard  both in the dialogue surrounding the conforting ‘Non piangere Liu’ or the firm fighting spirit in the cleverly phrased and punctuated declamations in the mighty ‘Nessun Dorma’ much later on.

The acting and caricature in voice and well as movement endears David Parkin’s father figure of the persecuted Timur to us. His bass utterances are imbued with perfect bristling fragility. 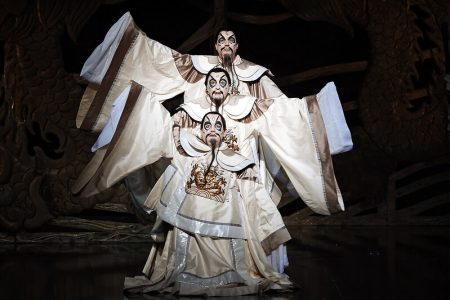 Impressive use of the stage and believeable verismo vignettes are  always present in Karah Son’s riveting depiction of Liu. The challenging vocal trajectories of her pleas to Calaf to forget the riddles of the cruel Turandot and stay safe show restraint and  admirable vocal control (‘Signore, ascolta!’ )

Karah Son’s intelligent verismo approach weaves her vocal lines around the music, stage setting and elasticity of emotion in the text. Shimmering, sudden leaps to silvery high register beauty or slow but steady orgzanic growth to climaxes as in the horror of the chilling pre-suicide ‘Tu che digel sei cinta’ to the cold, loveless Turandot are signs of a true diva in the making.

The trio of ministers tired of oranising rolling executions of suitors  are a joy to watch before the grisly treatment of Liu and Timur. Pong, Pang and Ping (Virgilio Marino, Iain Henderson and Luke Gabbedy) sing with lovely, veiled cantabile the nostalgic retirement-hungry ballad,  ‘Ho, una casa nell’ Honan’. 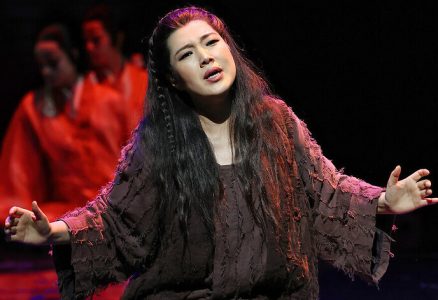 The role of the bitter princess Turandot is ruthlessness and anger personified, appearing first by travelling on a rolling bad-girl board. Experienced diva Lise Lindstrom towers above all others on the wheeled plinth, shining with icy fire in her non-earthy white gown and dark helmet of hair. Her dramatic soprano voice barks orders as mighty mute arm movements warn challenge about this larger than life body carve up the stage.

Thankfully the vocal sparring of the principals is up on the level of Lindstrom’s instensity. Her fiery and harsh arcs heard in the history lesson on ‘In questa reggia’ about her wronged female ancestor are matched in ensuing scenes by the choruses, other principals and especially the consistently full tone from Yonghoon Lee in the riddle guessing sccene  and in achingly beautiful scenes where he introduces the principessa to the sweet sound of love.

The challenging quick turnaround of evil princess to gentle lover that Puccini’s work demands of Turandot is handled with athletic scaling down of gesture and vocal colour by talented soprano Lise Lindstrom. The result is not trite or clumsy here and the warmth of this denouement on an attractive full stage is why people have been flocking to Puccini for centuries. Live opera still matters, and we are lucky to have Opera Australia and this production back with a virtuosic, variegated vengeance.

Turandot plays at the Sydney Opera House until March 14.